From Zelda Dungeon Wiki
Jump to navigation Jump to search
Want an adless experience? Log in or Create an account.
East Deplian Badlands 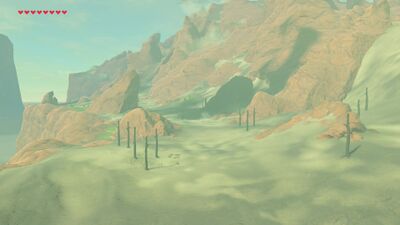 The East Deplian Badlands are a location found in Breath of the Wild.

The East Deplian Badlands are located just north of Eldin Mountains at the north end of Hyrule. Given its closer proximity to Death Mountain, the area is under consistent sunshine. 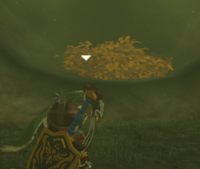 Climb inside of the skeleton's north-facing eye socket, sweep away the leaves, then pick up the rock.

Sweep away the leaves, then pick up the rock. 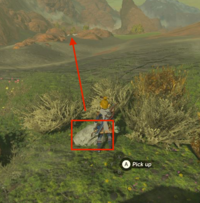 Complete the stone circle using a nearby rock (which is in a clump of bushes to the east as you head to the Lynel. Stasis can help you see it.).

Complete the rock circle using the rock in the direction of the gap in the circle.

Stand next to the pinwheel atop the tree and shoot the balloons.

Climb the tree, stand near the pinwheel, and shoot the 5 balloons hiding behind nearby objects.