From Zelda Dungeon Wiki
Jump to navigation Jump to search
Want an adless experience? Log in or Create an account.
Scout's Hill 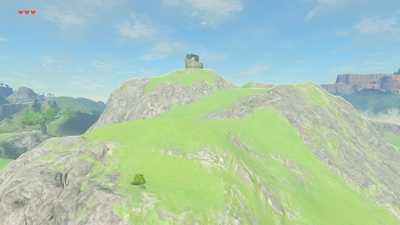 The Scout's Hill is a location found in Breath of the Wild.

The hill is located in the West Necluda region of the game, just west of the Hylia River and south of the East Post Ruins. The Bosh Kala Shrine can be found at the northern base of the hill.

At the peak of the hill, there are some ruins with a staircase. A rock can be found here with a Korok hiding beneath it. There are additional stone structures down the hill to the south with some stone steps that lead up to the hill's peak.

There is a tower located at the north end of Scout's Hill with a treasure chest on top of it containing a Sapphire gem. There are also a pair of treasure chests south of Scout's Hill, down in the water at the bottom of the waterfall that flows into Lake Hylia. Inside Link will find a Silver Rupee and some Ice Arrows.

As the area is fairly wide open with grassy plains, it attracts Grassland Foxes that can be seen running around. Additionally, both Pink Heron and Blue-Winged Heron will occasionally appear near the hill. The hill is fairly quiet in terms of enemies, with a Chuchu or Keese Swarm appearing rarely. At nighttime however, Stalkoblin will occasionally pop up.

Shelter from the Storm

Main article: Shelter from the Storm

When talking to Pikango at the Highland Stable, Link can show him one of the pictures that are part of the Captured Memories main quest. He recognizes the Bridge of Hylia in the background and thinks that perhaps the picture was taken from Scout's Hill.[1] In reality, the picture is taken just east of Scout's Hill, near the tree that is right on the east side of the Hylia River. 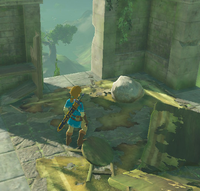 Climb to the top of the structure here and pick up the rock. 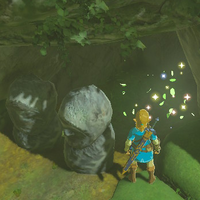 Investigate behind the two statues.

The fairy lights won't be visible from a distance, but if you walk behind the two statues, it will be there.