Temple of Time (Breath of the Wild) 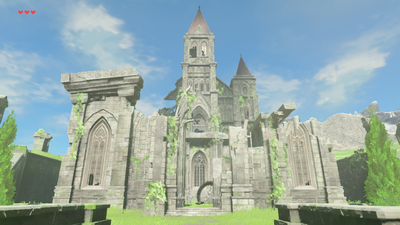 The Temple of Time is a location found in Breath of the Wild.

The temple is located near the center of the Great Plateau and is one of the first landmarks that Link finds when he awakens from the Shrine of Resurrection. The Temple is in ruins, having been ravaged by the Calamity Ganon. It is missing walls, has broken windows, and a significant portion of the roof has caved in. Many Bokoblins can be found roaming the area surrounding the Temple of Time.

After Link has acquired the Spirit Orbs from the Oman Au Shrine, Ja Baij Shrine, Owa Daim Shrine, and Keh Namut Shrine, the Old Man will appear. He tells Link to imagine an X on his map, with the four shrines as the end points. The Old Man wants Link to meet him at the point where the lines intersect.[1] This location corresponds to the Temple of Time.

At the back of the temple, a Goddess Statue can be found, and Link can choose to pray to it. If Link returns to this location after obtaining at least four Spirit Orbs, he can choose to exchange them for either a Heart Container or a Stamina Vessel.

After acquiring either a Heart Container or Stamina Vessel, the Old Man will call out from on top of the Temple and asks you to join him.[2] On top of the Temple, the Old Man will reveal himself to be Rhoam Bosphoramus Hyrule, the last King of Hyrule. King Rhoam will tell Link of what had happened 100 years ago. He will tell Link to Seek Out Impa at Kakariko Village before then giving Link the Paraglider, allowing him to leave the Great Plateau. 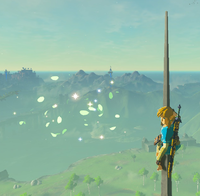 Examine the fairy lights at the top of the Temple of Time.

At the Temple of Time, there is a ladder on the east side of the building that you can climb to get to the roof. Head to the north to reach the steeple, then proceed to climb on top of it and up the rod. At the very top, examine the Fairy Lights to find the Korok. 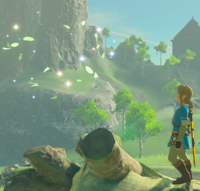 Examine the fairy lights on the top of the Woodcutter's Cabin.

Climb on top of the Old Man's hut and interact with the Fairy Lights.