From Zelda Dungeon Wiki
Jump to navigation Jump to search
Want an adless experience? Log in or Create an account.
Hopper Pond 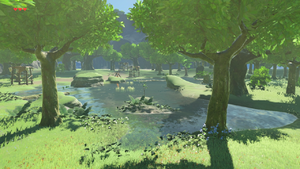 The Hopper Pond is a small lake situated in the Forest of Spirits on the Great Plateau in Breath of the Wild. Along the side of the pond is a Bokoblin Camp where they are cooking some Seared Steak. The Bokoblin here wield Boko Shield, Boko Clubs, and Boko Bows. Once they are defeated, a treasure chest containing an Opal gem becomes available. On the opposite side of the pond and down a short slope is the arena styled area for a Stone Talus Fight. 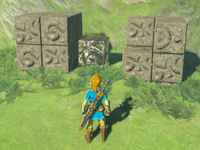 Use Magnesis to put the block in the correct place. Located on a cliff ledge.

On a ledge west of Hopper Pond there is a block puzzle. Use the Magnesis Rune to move the block and match the two.

At night there is a peaceful atmosphere to the area, being the only named location on the Great Plateau to not have any enemies spawn past the initial camp of Bokoblin