From Zelda Dungeon Wiki
Jump to navigation Jump to search
Want an adless experience? Log in or Create an account.
Jeddo Bridge 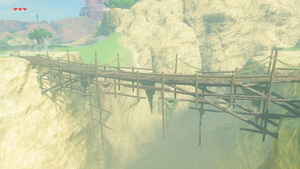 Jeddo Bridge is a location in Breath of the Wild.

The Jeddo Bridge extends over the Tamio River, connecting the Nima Plain with the West Hyrule Plains to the north. Just on the north side of the bridge, Link will encounter Kass playing his accordion. Speaking to him will begin The Two Rings shrine quest, which in turn will unlock the Sheem Dagoze Shrine, found just northwest of the Jeddo Bridge.

While on the bridge, Link may run into some Warm Darners that are flying around. At nighttime there are some enemy Keese and Stalmoblins that appear. Way down beneath the bridge, there are some Water Octoroks found within the Tamio River. 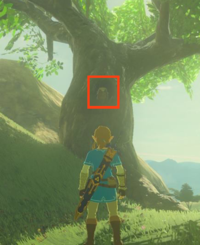 Break the nut in the hole in the tree.