From Zelda Dungeon Wiki
Jump to navigation Jump to search
Want an adless experience? Log in or Create an account.
The Two Rings 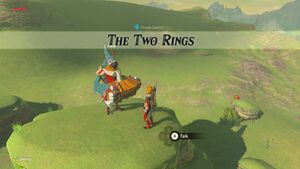 The Two Rings is a Shrine Quest from Breath of the Wild.

Speak with Kass, who can be found at the West Hyrule Plains, located just north of the Jeddo Bridge. He will give the quest, that states that the shrine will rise when a single Arrow threads two rings.[1] It's not necessary to talk to Kass in order to make the shrine appear, only to trigger and complete the quest.

Most of the stones are aligned in a position so you purposely cannot shoot an arrow through multiple rings. However, there is one stone that is on a small plateau and if you face the Jeddo Bridge, you'll see a second stone. Aim slightly higher than the hole as the arrow will fall down a bit, depending on the type of bow you have; this can also be achieved by shooting from the higher ring, though it's more difficult. If you shoot a bow throw both rings, the Sheem Dagoze Shrine will appear. This can only be accomplished with single-shot bows, as arrows from multi-shot bows will not trigger the shrine even if shot through both of the holes[TTR 1].

The Sheem Dagoze Shrine requires Link to step on floor switches, which will cause the ramps in the distance to change their orientation. By stepping on the two switches, Link needs to guide the Ancient Orbs down the ramps and into the pedestals at the bottom.