From Zelda Dungeon Wiki
(Redirected from Under a Red Moon)
Jump to navigation Jump to search
Want an adless experience? Log in or Create an account.
Mijah Rokee Shrine 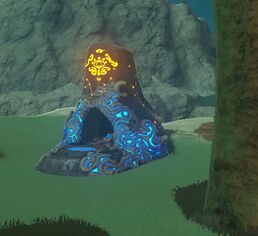 Mijah Rokee Shrine is one of the many Shrine of Trials from Breath of the Wild.

Shrine Quest: Under a Red Moon

Talk to Kass to start this quest. He'll be on top of the tall mushroom next to the pedestal. This mushroom will also have a small gazebo where Link can read Kass's Journal.

The goal is to stand on the pedestal during a blood moon, wearing absolutely nothing. No armor, no weapon, no bow, no shield. The pedestal will glow orange when you're eligible to do this. You can either try to pass time until a blood moon happens, or use one of the nearby other shrines as a teleport point and run over here the second a blood moon begins to happen while you go about doing other things. Completing the objective completes the quest and reveals the shrine.

The pedestal can be activated as soon as malice wisps start appearing in the air, so it's not necessary for the cut scene to have happened to go ahead with the activation.

Kill the Guardian Scout III wielding a Guardian Sword+ and a Guardian Shield+, open the chest (Frostblade), and head to the altar for your Spirit Orb.