From Zelda Dungeon Wiki
Jump to navigation Jump to search
Want an adless experience? Log in or Create an account.
Kamia Omuna Shrine 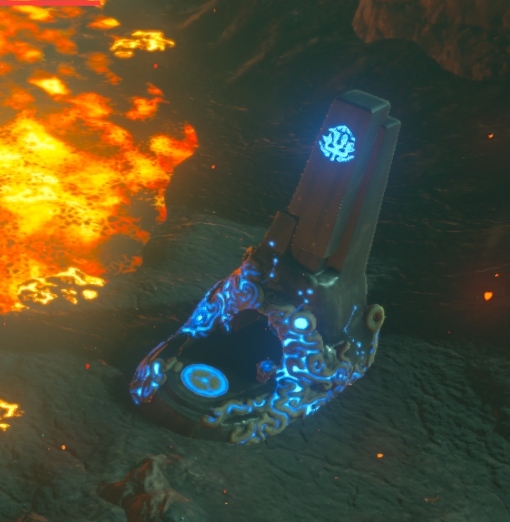 The Kamia Omuna Shrine, also known as Moving Targets, is one of the many Shrine of Trials from Breath of the Wild.

This shrine is located near Lake Darman, and is accessed during the Divine Beast Tamer's Trial, as a part of The Champions' Ballad DLC pack.

Make your way over to Lake Darman, which is located at the north end of the Eldin province, northeast of Goron City. Just north of the lake is a Goron named Krane, who tells you of a huge monster in Lake Darman.

Once you arrive you will find that there is an Igneo Talus Titan in the lava below. Since the Talus is actually in the lava, there is no safe ground around it. Fortunately there is a constant wind gust from the ground, allowing you to stay in the air for a while. I recommend shooting it with Ice Arrows from above if you have them so that you can land on top of the Talus and strike it with a strong weapon. Even if he is flaming, you can still land on top of him, but you won't do as much damage. Once defeated, the Kamia Omuna Shrine will open up to the northwest.

Run over and drop a spherical bomb into the opening. Hit the switch and when it is about to be lined up with the target, detonate the bomb to launch the orb at it. Once you hit it, a second target will appear, this one moving up and down. The process is the same and you just have to time it. Once the target pauses at the top. Use Stasis to stop it. Then hit the switch, once’s it’s centered launch the orb.

Just to the right of the target you will find a treasure chest in the distance. If you launch an orb at it, the orb will break the wood that the treasure chest is standing on. Then you can run across the platform to get to it. Use Magnesis to grab the treasure chest and bring it towards you. Then open it up to get a Diamond.

Up ahead on the right you will find a motion puzzle. Turn the object so that the target is facing you. Then use the same device below to launch an orb at it. Once you hit it a second target will appear. This time you want to adjust the object with the motion control so that a clear pathway through the center of the objects highlights the target. Once again launch an orb at the target to hit it. Run up and speak with the monk.

Alternatively, you can use bomb arrows if you can't get your aim/timing right.