From Zelda Dungeon Wiki
Jump to navigation Jump to search
Want an adless experience? Log in or Create an account.
Kiah Toza Shrine 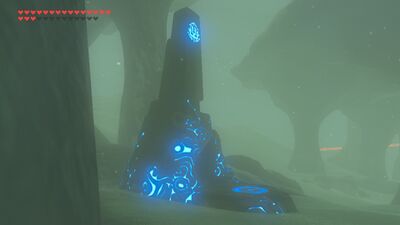 The Kiah Toza Shrine, also known as Master the Orb, is one of the many Shrine of Trials from Breath of the Wild.

This shrine is located in the northeast area of the Pikida Stonegrove, and is accessed during the Divine Beast Tamer's Trial, as a part of The Champions' Ballad DLC pack.

Make your way to Goma Asaagh Shrine, below Hebra Peak, and to the southeast you should notice a blue Sheikah-inspired gate. Start shield surfing and head through it. This will trigger a race where you will need to travel through all the gates in order to activate the Shrine. Be careful of the pit toward the start of the race; use your Paraglider to catch the updraft and land on the other side.

It's recommended that you go through the shield surf course during daytime, since this will prevent Stal enemies from sprouting out of the ground and you crashing on them.

After you have gone through all the gates, and have arrived at the Pikida Stonegrove, the Kiah Toza Shrine will appear.

Head directly forward to encounter an updraft. Float up to the top, and you should spot a chest; paraglide towards it.

On this top platform you'll find some water and a stone brick. Use Cryonis to get on top of the block, then destroy the pillar you just created. Next, create a new pillar below the block. This will raise the block, allowing you to reach the higher ledge. Open the chest here for a Falcon Bow.

Jump to the bottom again, and you'll spot a waterfall dead ahead. Use Cryonis to create two pillars which will carry the ball across. Make sure the second one is slightly lower than the first to allow for the ball to maintain as much speed as possible.

Head back up the mechanism, and towards the top you will find some metal blocks on a rail. Move them to prevent the ball falling off the edge.

Step on the nearby switch to change the direction of the conveyor belt. Stay in this position until the ball has fallen down.

After the ball has fallen, quickly pull out Stasis, and use it on the see-saw down below. The ball will now continue to fall and should go across the ice pillars you created earlier.

Jump down to the bottom towards the switch which will launch the ball towards its hole. Step on this switch at the right time to send it flying. This will open the gate to the Sheikah Monk.

Head through the gate and speak with Kiah Toza. They will give you one of three Medoh's Emblems.