From Zelda Dungeon Wiki
Jump to navigation Jump to search
Want an adless experience? Log in or Create an account.
Kah Yah Shrine 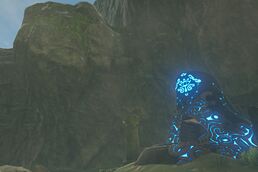 Kah Yah Shrine, also known as Quick Thinking, is one of the many Shrine of Trials from Breath of the Wild.

Link will need to have first completed the Locked Mementos Main Quest and have acquired the Camera (Rune). The shrine cannot be uncovered without engaging in the shrine quest.

Speak with Garini at the Palmorae Ruins, located east of Lurelin Village to begin the quest. Garini tasks Link in finding the missing Monument Shards and taking pictures of them so that he can decipher what the stone structure originally said.

One fragment is located just east of where Garini is located, right around the corner. A second is found at the west end of the Palmorae Beach, near some rocks. The third monument shard is located at the tip of the Soka Point. After showing Garini all three pictures, Link will then need to kneel down on one of the pedestals. Garini will kneel down on the other, causing the Kah Yah Shrine to appear.

On the left, you'll find a moving platform, along with and some barrels. Grab one of the barrels and ride the platform. The objective is to ride all the way to the end without you or the barrel getting knocked off. Hold the barrel until you pass the first wall. Then place the barrel on the right side and crouch down, so you can pass underneath the second wall. Then lift the barrel and carry it to the end. Place it on the floor switch to open a gate back at the start. Run on over and open the chest to get a Small Key.

On the other side of the room, there is a treasure chest that contains a Knight's Claymore. This side of the room has a similar puzzle where Link will need to carry a barrel across the moving platform. Grab the barrel and step onto the moving platform. After passing the first arch, shoot the crystal with an Arrow, causing the gates to rise and lower. After passing the second arch, shoot the crystal again, which allows Link to reach the end of the room. Place the barrel on the floor switch to unlock the gate with the treasure chest.

Use the small key on the locked door at the altar. Then speak with Kah Yah to get the Spirit Orb.