From Zelda Dungeon Wiki
Jump to navigation Jump to search
Want an adless experience? Log in or Create an account.
Palmorae Beach 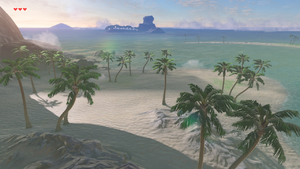 Palmorae Beach is a location in Breath of the Wild.

The Palmorae Beach is located a bit east of Lurelin Village, right along the coastline. The beach is a great location to find some rare beetles, as there are a number of Bladed Rhino Beetles, Energetic Rhino Beetles, and Rugged Rhino Beetles on many of the palm trees in the area.

In the water, almost halfway between the Palmorae Beach and Soka Point, there are a pair of treasure chests buried underwater containing a Silver Rupee and a Sapphire gem. While there are Armored Porgy and Mighty Porgy all around the beach, there is a massive quantity of them, circling around these two treasure chests.

At the north end of the area, Link will find the Palmorae Ruins and after speaking with Garini‎‎ here, this will begin the A Fragmented Monument shrine quest. Link is tasked with finding three of the Monument Shards so that Garini can decipher the message. Two of the shards can be found right on the Palmorae Beach. One can be found at the north end, just east and right around the corner of where Garini is standing. A second shard is found at the southwest portion of the beach, near the rocks in the shallow water. The third shard is found across the water, at the tip of the Soka Point.

After taking pictures of all three shards, Link can show them to Garini, who will then decipher the message. Link can then kneel down on one of the pedestals, with Garini kneeling on the other one, causing the Kah Yah Shrine to appear, completing the quest. Inside the shrine, Link will meet up with Kah Yah and get a Spirit Orb.