From Zelda Dungeon Wiki
Jump to navigation Jump to search
Want an adless experience? Log in or Create an account.
A Fragmented Monument 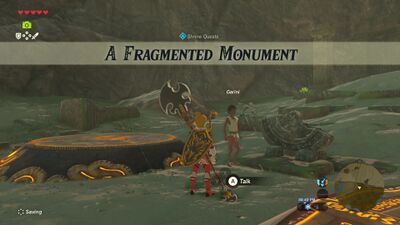 A Fragmented Monument is a Shrine Quest from Breath of the Wild.

The shrine cannot be uncovered without engaging in the shrine quest.

While in Lurelin Village, Link will see a young child named Zuta running around. Zuta will mention the ruins he found alongside Garini, located out to the east at the Palmorae Ruins. Zuta will guide Link to the ruins, found just east of the village. Here Link will find Garini and when he first speaks with him, this will begin the shrine quest.

Garini is trying to decipher what was said on the stone monument, but due to an earthquake, the monument has broken up into scattered fragments. Link is tasked with finding the three fragments and taking a picture of them with the Camera (Rune). With all the fragments, Garini will be able to decipher the message.

After finding all three shards and taking pictures of them, return over to Garini. Garini will decipher the text and learns that it states, "When the two find their place and kneel in reverence, the shrine will reveal itself."

Walk over to the large pedestal on the right side and then kneel down. Stay down for a moment and Garini will turn and look towards Link. He will then kneel down on the other pedestal. Doing so will cause the pedestals to turn blue and the Kah Yah Shrine will appear. This will complete the shrine quest.

On the left side of the room, grab one of the barrels and step on the moving platform. After passing the first wall, drop the barrel and duck down, to get beyond the second wall. Then grab the barrel and drop it on the floor switch at the end of the room. Run over and open the treasure chest to get a Small Key.

(Alternatively, you can carry a barrel, jump of the platform to the right, wait for the platform to cycle through, then jump back on the platform. This does not require you to time firing an arrow at the switch.)

Use the small key on the locked door. Then speak with Kah Yah at the altar to get a Spirit Orb.