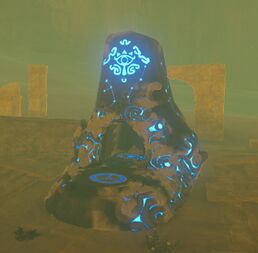 Kema Zoos Shrine is one of the many Shrine of Trials from Breath of the Wild.

Talk to Laine, the guard at the northwest exit of Gerudo Town, to start the quest.

A sandstorm swirls in the area, so the Sheikah Slate won't be much use. Instead, follow in the general direction that the statues are pointing with their swords. If you roam around enough you'll keep coming across them and eventually find the shrine. Unlocking it completes the quest.

An orb is getting launched back and forth. The goal is to get control of this orb. Multiple methods exist, such as using Stasis and shooting it with an arrow, or you can grab it directly off one the platforms with Magnesis if you get a good angle.

Another alternate method is to use Stasis on the orb as it sits in the launcher before getting launched and not hit it. The launcher will moved the orb in front of it and it will just drop to the ground.

Once you have control of the orb, carry it to the far left corner, dropping it over the gated wall to open the gate to a chest which may contain a Moonlight Scimitar.

Grab the orb again with Magnesis and drop it next to the charge crystal in the far right corner to open the path to the altar, and get your Spirit Orb. Alternatively, you can strike the crystal with an electrically charged weapon.