From Zelda Dungeon Wiki
Jump to navigation Jump to search
Want an adless experience? Log in or Create an account.
Rin Oyaa Shrine 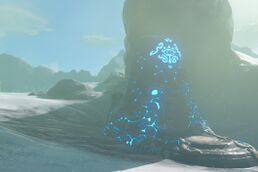 Rin Oyaa Shrine is one of the many Shrine of Trials from Breath of the Wild.

The shrine can be found adjacent to the Snowfield Stable, located within the S. Tabantha Snowfield. It can be easily reached from the stable, or from the Hebra Tower to the southwest, though the shrine is relatively adjacent to the road itself.

The shrine provides northbound access to the Tabantha Tundra, being the south counterpart to the northern Sha Gehma Shrine.

The objective here is to get the Ancient Orb into the hole at the center of the shrine. This will cause a platform to rise, allowing Link to reach the altar where Rin Oyaa is waiting.

There are two metal crates in the room that Link can move with Magnesis. The center platform has two whirlwinds blowing wind that will move the ball if it passes by. Place the two metal crates immediately in front of the two whirlwinds near the center of the room. Now climb the ramp, with the Ancient Orb in hand and drop it down the ramp. It will blow around the room, with each of the fans blowing it until it reaches the center of the shrine, falling into the hole.

Before heading to the alter, you'll notice there is a treasure chest across the room, but you'll need to bring up a metal block. The easiest way to do this is to the follow the same instructions to get the orb into the center hole. However, this time, once it rolls right by the first fan that is blocked, quickly grab it with Magnesis and bring it up the ramp. Then when the ball falls in place, the metal crate will also be carried upward. Position in the middle of the gap and then jump to the treasure chest to get an Ancient Core.

Run over to Rin Oyaa at the alter to get the Spirit Orb.

An alternative solution is to place the magnetic blocks in the gap between the raised platform and the chest. Then, pick up the Ancient Orb, place it near the hole, and use Stasis on it before it falls into place. This will give you enough time to run up the ramp and reach the platform, from where you can easily reach the chest and the altar.

So that there's no movement of the orb to perform the Stasis, Link can stand inside the hole, himself preventing the orb from falling, and then performing the Stasis.

This method requires only one whirlwind, making the rest of the puzzle unnecessary, and does not require timing.