From Zelda Dungeon Wiki
Jump to navigation Jump to search
Want an adless experience? Log in or Create an account.
Biron Snowshelf 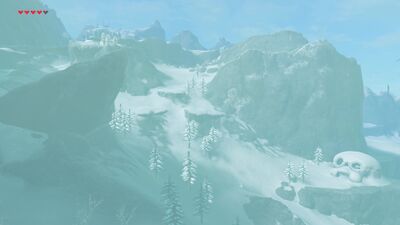 Biron Snowshelf is an area in Breath of the Wild.

The Biron Snowshelf is a large region at the west end of the Hebra Mountains. It primarily covers the higher elevated area, just north of Lake Kilsie. As with most of the Hebra province, the temperature is bitterly cold, requiring Link to wear armor with Cold Resistance, such as the Snowquill Set, in order to survive.

On the plateau at the top of the snowshelf, there is a dangerous Guardian Stalker that will awaken when Link draws near. There are also Snow Octoroks and Cold-Footed Wolves in this area, making it even more dangerous for Link to battle the guardian.

At the northwest portion of the snowshelf, there is a snowy enemy skull camp with a number of Black Lizalfos and some Ice-Breath Lizalfos. After defeating them a treasure chest will appear in the base that contains ten Fire Arrows. Just south of the camp there are some breakable boulders by the cliff that have a treasure chest that contains a Ruby gem. Just east of the skull base, on a significantly higher plateau, there is a very dangerous enemy camp, with a ton of Black Moblin and a Black Lizaflos. When defeated, Link can open the treasure chest to get a Knight's Shield.

There are a few more treasure chests in the area; one just southwest of where the Guardian is located, on a slightly lower elevation. The chest here contains five Ice Arrows. Another is found east of the guardian, at a much lower elevation. It is found next to three trees, where some Black Moblin and a Black Lizalfos are. The chest is stuck in the snow and contains a Sapphire gem.

The Mozo Shenno Shrine is located underneath the plateau at the top of the Biron Snowshelf. Directly east of the snowshelf, there is a mountain peak at the Hebra Tundra. From there, if Link travels westward, he will spot the shrine, through a cave that is in the side of the cliff. The shrine its is A Major Test of Strength shrine. Throughout the shrine there are some metallic blocks that Link can bring up with Magnesis, to avoid the spin attacks from the Guardian Scout IV.

Once the scout is defeated, it will drop its Ancient Battle Axe++, Guardian Sword++, and Guardian Spear++. The treasure chest in the shrine contains a Diamond. Run over to Mozo Shenmo at the altar to get the Spirit Orb. 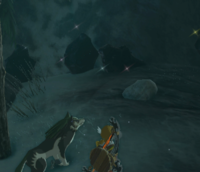 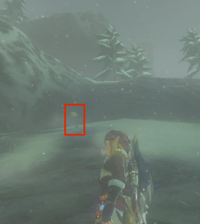 The flower trail starts a short distance southeast and down the cliff. Follow it up the cliff.

The flower trail starts a short distance southeast and down the cliff. Follow it up the cliff. 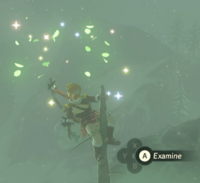 Climb the dead tree and interact with the fairy lights. 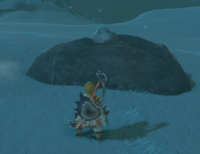