From Zelda Dungeon Wiki
Jump to navigation Jump to search
Want an adless experience? Log in or Create an account.
Lake Kilsie 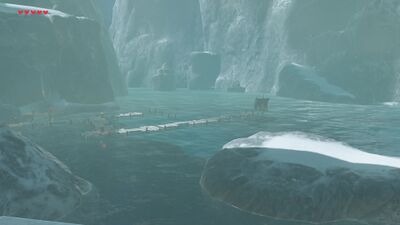 The Lake Kilsie is a location found in Breath of the Wild.

Lake Kilsie is a frigid lake, found at the west side of the Hebra Mountains. As with most of the Hebra Tower region, the temperature is frigid, requiring Link to have armor with Cold Resistance to survive, such as the Snowquill Set. Despite the temperature dropping to less than 10 degrees Fahrenheit at some locations, the lake is safe to swim in. The cold temperature of the lake makes it so that no fish are able to survive.

At the south end of the Lake there is a dock with a Raft near it. On the raft is a Korok Leaf, which can be used to navigate across the Lake. A second raft can be found near the docks at the center of the lake, with a third raft found at the far north end.

At the southeast end of the lake there is a small island with some boulders on it. Link can blast away at the boulders, causing a large wind geyser to appear. The air can be used alongside the Paraglider to quickly reach higher elevations around the Lake. Similar boulders with wind geysers can be found near the docks at the center of the lake, at the island near the center of the lake, and all throughout the region.

At the west side of the Lake on the cliffs, directly west of the center docks, there is an odd set of boulders against the wall. It's a bit awkward to drop a bomb in the area, but doing so causes a treasure chest containing a Meteor Rod to fall down the cliff. Another chest with a Silver Rupee can be found buried in the snow just north of the docks at the far north end of the lake, near one of the trees.

Near the docks at the center of the lake, Link can peek through a narrow hole in the wall to see the shrine, but cannot access it. If Link travels to the tall island that sticks out of the center of the lake, he'll find some boulders. Blast away the boulders with a bomb and then use the Paraglider to fly up. From here, if Link looks directly westward, he'll see a tunnel that is indicated by torches on each side. Travel to this area and then carefully drop down. Swim in the water through the narrow corridor to find the shrine.

The actual shrine has a series of diverse challenges, requiring Link to light a torch, navigate a moving spiked platform, use Cryonis to create ice blocks, and use Magnesis to maneuver passed a spiked ball. At the end of the shrine, Link will meet with Maka Rah to get a Spirit Orb. 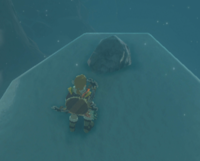 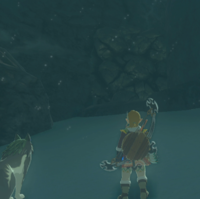 Under a rock behind some destructible rocks. 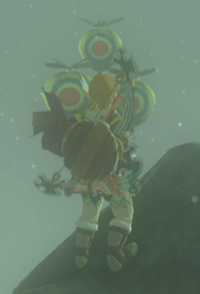 Shoot the three balloons, standing next to the pinwheel.

Follow the trail of flowers starting uphill to the southwest.