From Zelda Dungeon Wiki
Jump to navigation Jump to search
Want an adless experience? Log in or Create an account.
Tanagar Canyon 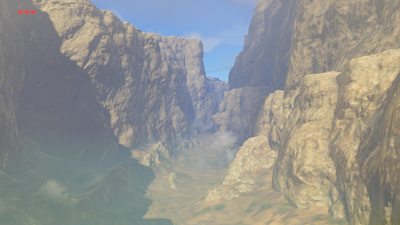 Tanagar Canyon is a very long canyon in Breath of the Wild which forms the border between Hebra and the Central Hyrule and Gerudo provinces.

It extends from just north of the Gerudo Highlands all the way to the Forgotten Temple, located east of the Snowfield Stable.

Throughout the canyon, there are numerous windmills setup of varying heights. Most of the canyon is fairly desolate, but there are a few enemy Black Lizalfos and some Maraudo Wolves that roam around. There is very little vegetation, with just some Rushrooms on the cliffs, as well as some uncommon Cool Safflina.

The Tabantha Great Bridge extends over the Tanagar Canyon, connecting the Hyrule Ridge and Tabantha Frontier regions. The area near the Tabantha Great Bridge is one of the locations where Dinraal passes by on some mornings. A fantastic way to farm some of Dinraal's materials is to first travel to the Tabantha Bridge Stable. Sit by the campfire until the morning and then run over to the bridge, Dinraal will pass underneath the bridge each morning around 7am and since it travels below the bridge, Link has plenty of time to aim his shot and gather whichever material he needs.

Just south of the start of the Tanagar Canyon, there is a Bokoblin base with Red Bokoblin, Blue Bokoblin, and Black Bokoblin. After defeating all the enemies, Link can open the treasure chest to get a Sapphire gem.

The Dunba Taag Shrine can be found at the very bottom of the Tanagar Canyon, located just southeast of the stable. Also known as Build and Release, the shrine requires Link to use Stasis and give items and objects kinetic energy where they can then be used to press switches or knock down large slabs. At the end of the shrine, meet up with Dunba Taag at the altar to get a Spirit Orb.

Run through the patches of flowers 1–5.

Run through the patches in ascending order. 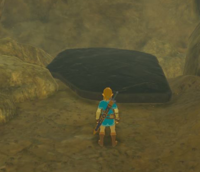 Under a rock under a slab.

Move the slab, then pick up the rock. 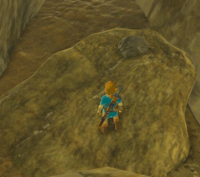 Under a rock between the pillars. 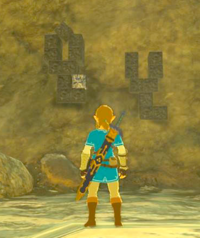 Use Magnesis to move the magnetic cube to make the patterns identical. The eastern pattern is rotated but should otherwise look the same. 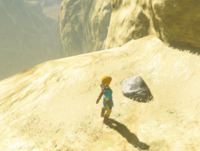 Under a rock, a fourth down the canyon.

Shoot an acorn hanging from the lower part of the windmill. 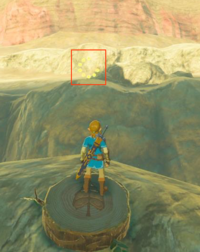 Race from a cliff to the north to the finish to the south.

Run over the seed platform, glide across the canyon, and climb to the ring. 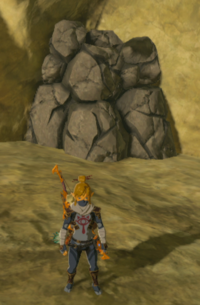 On the side of the cliff just below the very top, blow up the cracked boulders then lift the small rock hidden behind them.

Blow up the boulders just below the top of the cliff, pick up the rock. 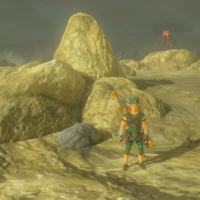 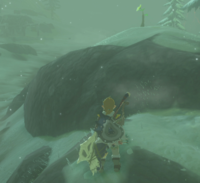 Follow the trail of flowers that starts next to the road to the north.

Follow the flower trail. It starts next to the road to the north.