From Zelda Dungeon Wiki
Jump to navigation Jump to search
Want an adless experience? Log in or Create an account.
Bareeda Naag Shrine 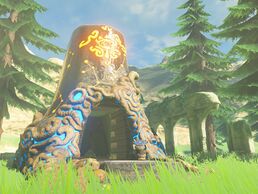 Bareeda Naag Shrine is one of the many Shrine of Trials from Breath of the Wild.

Talk to Bedoli in Rito Village at Revali's Landing to start the quest. The first half of the song is as follows: "The pride of the Rito, pillar in the sky, its heart lights up, when the sun is high."

Optionally, you can talk to Laissa (near Bedoli) to update the quest log slightly with an additional clue. The second half of the song is as follows: "The heart shines upon a path not whole, but a warming flame can stir its soul."

Head south of Rito Village to the shrine pedestal.

The goal is to ignite a fire on the pedestal when the shadow passes over it. The shadow has a hole in it which at this angle is shaped like a heart. The pedestal will light up when the timing is correct, at 12:35 pm. You can set a campfire on top of the pedestal, wait until midday, then hold out for the remaining 35 in-game minutes. Alternatively, you can hit it with a fire arrow at the correct time to complete the quest and unlock the shrine.

Climb up the ladder to the big cannon and drop a round bomb in. When you detonate the bomb, it shoots the orb out to blow up the crates. This will unlock the puzzle.

The puzzle is basically to do the same thing, drop a bomb in, and blow it up. Time it so the orb hits the platform in the distance. Alternatively, you can just shoot the distant platform with a bomb arrow if you have trouble timing the cannon correctly.

That's it for the altar, but there are also two chests. One is behind a bombable wall in the first room, usually containing a Falcon Bow. The other is past the altar, after a second cannon puzzle - open it to get a Diamond.

When you're done here, head to the altar to get the Spirit Orb.