From Zelda Dungeon Wiki
Jump to navigation Jump to search
Want an adless experience? Log in or Create an account.
Dila Maag Shrine 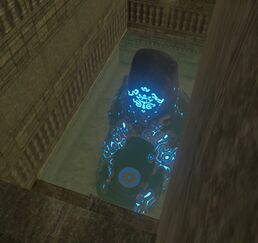 The Dila Maag Shrine is one of the many Shrine of Trials from Breath of the Wild.

It's located in the middle of the South Lomei Labyrinth, though it's barred from access until the path through the labyrinth is reached.

Enter the Labyrinth to start the quest. The map below shows a route which avoids all of the Malice goo, highlighted in dark blue. Dotted lines are tunnels. Light blue indicates a Malice-covered block above the corridor, which only poses a hazard if dropping in from above.

A number of alternate routes are possible by either climbing over a wall or climbing sideways along a wall to cross a patch of Malice goo. Most of the maze can be skipped by climbing a wall and dropping down at the green line. 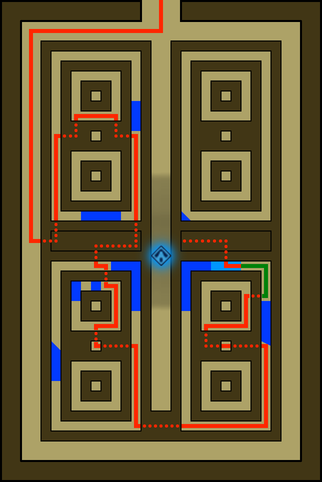 After all that effort, the shrine itself contains no challenges at all. Simply move forward, open the chest to get the Barbarian Armor. Then speak with Dila Maag at the altar to get a Spirit Orb.