From Zelda Dungeon Wiki
Jump to navigation Jump to search
Want an adless experience? Log in or Create an account.
Ketoh Wawai Shrine 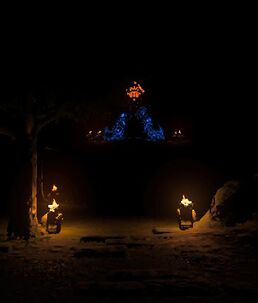 Easy way: If you have Revali's Gale -- or even if you do not -- you can fly easily from the rock structure next to the Hinox and land carefully on its stomach. From there you can grab the orb while it's sleeping. Throw the orb away from the body then jump and glide down. Quietly walk the orb to the pedestal to reveal the shrine.

The Thyphlo Ruins are best entered via the bridge on the west side of the ruins. Trying to glide over the moat from elsewhere leads to you being plunged into sudden and immediate darkness, which makes it very easy to misjudge your landing, at best. Once you're most of the way across the bridge, Link looks around, confused, and suddenly you are in the dark. Ketoh Wawai tells you to find the shrine, and off you go. There are two standing torches ahead of you and one torch you can grab and light from the standing torch that is lit. As you continue forward on the path, you will come across a number of standing bird statue torches, like the ones by the entrance to the ruins. Light them, it will help you orient yourself if you get lost, or relight your torch if you have to put it away for whatever reason.

Route between the Qaza Tokki Shrine / North Lomei Labyrinth and the entrance of the Thyphlo Ruins.
Breath of the Wild Shrines[edit][show][hide]
Retrieved from "https://www.zeldadungeon.net/wiki/index.php?title=Ketoh_Wawai_Shrine&oldid=442510"
Category:
Hidden category: