From Zelda Dungeon Wiki
Jump to navigation Jump to search
Want an adless experience? Log in or Create an account.
Seres Scablands 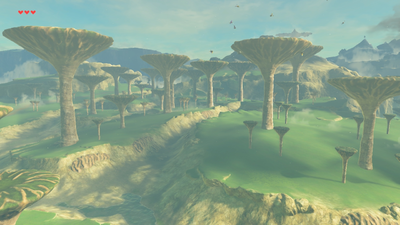 The Seres Scablands is a location in Breath of the Wild.

The Seres Scablands are located just east of the Tabantha Bridge Stable, and southwest of the Ridgeland Tower, found in the Hyrule Ridge portion of the map. Much like the Ludfo's Bog to the north, there are massive mushroom-like trees that have grown, along with a series of small ponds.

In the center of the scablands, a Blue Hinox can be found sleeping. This particular Hinox has a Soldier's Spear, Soldier's Broadsword, and Soldier's Bow around its neck.

Several of the mushroom trees in this area are so massive that Link will be unable to reach the peak of them, unless he has Revali's Gale. One of the mushrooms near the center of the area has a balloon just underneath its peak and if it is shot with an Arrow, a Korok will appear. A second balloon can be found under a tree at the northwest part of the area.

On top of the massive mushroom at the south end of the scablands is a small tree stump that triggers a yellow circle to appear on the mushroom to the west. This tree requires Revali's Gale, or a ton of Stamina to climb. From the stump, Link can easily paraglide over to collect the Korok Seed. One more Korok can be found at the far west of the scablands by examining the fairy lights that are moving around the area. 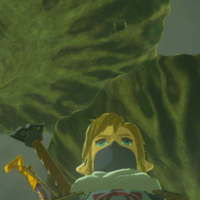 Shoot the balloon hanging under the huge mushroom tree.

Shoot the balloon under the big mushroom and above the smaller ones. 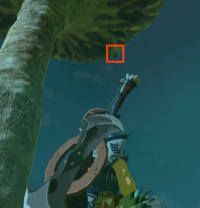 Shoot the balloon hanging under the huge mushroom tree. 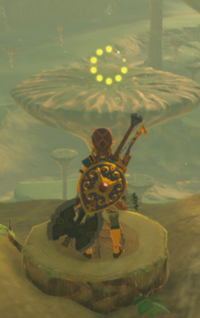 The seed platform is on top of an extremely tall mushroom to the southeast that can be difficult to climb. The race itself is an easy glide from there.