From Zelda Dungeon Wiki
Jump to navigation Jump to search
Want an adless experience? Log in or Create an account.
Manhala Bridge 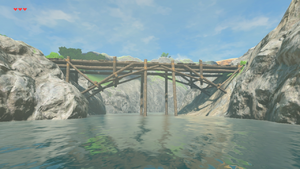 The Manhala Bridge is a location found in Breath of the Wild.

The bridge is not very well traveled, with Glendo being the only character that can be seen crossing the bridge. He rides his horse daily from the Outskirt Stable all the way to the Sanidin Park Ruins, crossing the bridge twice on his round trip journey. At nighttime, Link can encounter some enemy Keese and Stalmoblins in the area. In the water under the bridge, there are some Hyrule Bass and Staminoka Bass that can be found.

In Master Mode, there are a pair of floating platforms that are held up by Sky Octoroks. To the south, there is a treasure chest containing a Radiant Shield, where as the platform to the north has a chest with a Ruby gem.

The Manhala Bridge is named after the boss from The Legend of Zelda, Manhandla. Similar bridges in the area are all named after bosses from the first Zelda game, including the Gleeok Bridge, Aquame Bridge, and the Digdogg Suspension Bridge.