From Zelda Dungeon Wiki
Jump to navigation Jump to search
Want an adless experience? Log in or Create an account.
Monya Toma Shrine 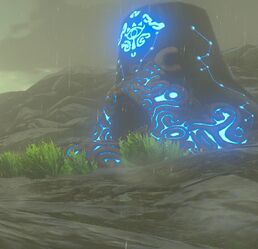 Monya Toma Shrine, also known as Drawing Parabolas, is one of the many Shrine of Trials from Breath of the Wild.

The shrine is south of the Serenne Stable on the western side of Salari Hill overlooking the Salari Plain on a relatively featureless area. It's the stable-related shrine which is the farthest away from its stable in the game (excluding the Rito Stable, which technically doesn't have one).

The shrine provides access to the northeast-bound road to the Tabantha Tundra from Central Hyrule and the bend that flanks the Tanagar Canyon to the east towards Hebra. It also provides eastbound access to the western fringes of the Great Hyrule Forest and Mekar Island, albeit the forest is not accessible from that direction.

When you first enter the shrine, wander around the corner to the left and you'll see some wooden boxes on a ledge. You can blow them up or burn them down, but you'll need to get rid of them. You can use the launchers that are in the room to make your way over on the higher ledge.

On one of the higher platforms, find the crystal switch and hit it twice to rotate the platforms. Now ride the launchers in the room twice, which will launch Link onto platform with a treasure chest. Open it up to get a Thunderblade.

Hit the crystal switch one more time so that the launcher is facing the direction of where the wooden boxes were. Now pickup the Ancient Orb and place it in the initial launcher. It will get launched around the room, eventually falling in place, opening the door. Run up to the altar and speak with Monya Toma to get the Spirit Orb.