From Zelda Dungeon Wiki
Jump to navigation Jump to search
Want an adless experience? Log in or Create an account.
Rinu Honika Shrine 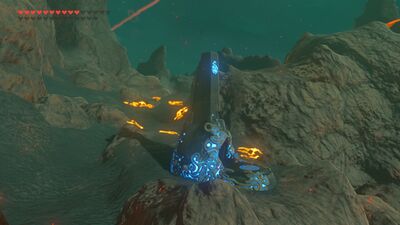 The Rinu Honika Shrine, also known as Block the Blaze, is one of the many Shrine of Trials from Breath of the Wild.

This shrine is located near the Darb Pond, and is accessed during the Divine Beast Tamer's Trial, as a part of The Champions' Ballad DLC pack.

Make your way over to the Darb Pond, located southeast of Goron City and south of the summit of Death Mountain. You will find that there is a blue symbol in the lava below and you have to step on it to get the shrine to appear. However, as it is right above lava, gliding towards it will cause you to fall into the lava and it will not trigger the shrine to appear. You can talk to the trio of Gorons on the higher cliff for more information but they don't provide any substantial hints.

On the west side of the pond you will find two large metal blocks. You can use Magnesis to grab them and place them in the lava. They are just tall enough so that they hit the base of the pond, allowing Link to stand on top of them without falling into the lava. Link will still take major damage when standing on these blocks. It is safer to use Magnesis and the blocks to move the rocks in the pond around as needed and stand on them. Use Magnesis to maneuver one of the rocks into the blue symbol in the lava. You may need to use two rocks and go back-and-forth between them due to Magnesis's short range. After a rock is in place, get on top of the rock, piercing the blue circle, and it will trigger the Rinu Honika Shrine to appear.

Use Magnesis on a block to bring a rock close to you. Stand on the rock. Use Magnesis to roll the rock you are standing on close to the blue circle triggering the Shrine to appear

If you have Revali's Gale, you can use Magnesis on a crate to push a boulder underneath the circle, then fly in from the top, making sure you land on the boulder and not in the lava. (It helps if you have at least two charges of Revali's Gale, otherwise you'll be stuck waiting for it to recharge.)

Tip - If you have all the of the Flamebreaker Armor up to level two, you have fireproof protection and can just run to the end of the shrine without completing the puzzles.

Titled Block the Blaze, this shrine requires you to avoid and block the blaze of fire, using blocks. Run ahead and simply duck underneath the first set of flames. Continue onward and the next line of fire is directly in your way. If you look at the pillar to the left, there is a breakable boulder down below. Toss a bomb and explode the boulder, causing it to drop down and allowing you to pass.

The next pillar on the right has a magnetic block underneath it. Pull it out use Magnesis and the pillar will drop, allowing you to pass. Use that Metal block and place it in front of the next flame. Now stand to the side of the block, grab it with Magnesis, and walk along with it so that it blocks the flames.

In the next area there are flames coming down from the ceiling and there is a second metal block in the lava below. Stack the blocks on top of each other and then use Stasis on the higher block. Quickly use Magnesis to move the lower block and then run on through. Just around the corner there is a treasure chest that you can use the blocks to reach. It contains a Stone Smasher.

The last challenge requires you to use motion controls to turn the platform. The platform has three small pillars on each side and you can turn it so that it is blocking all lines of fire at the exact same time. Do so and then quickly run across to reach the Monk.