From Zelda Dungeon Wiki
Jump to navigation Jump to search
Want an adless experience? Log in or Create an account.
Misae Suma Shrine 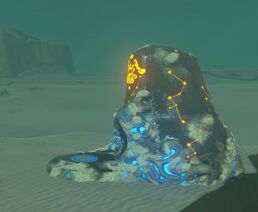 Misae Suma Shrine is one of the many Shrine of Trials from Breath of the Wild.

The shrine is located southeast of Gerudo Town behind a rocky outcrop in the middle of the desert. It's recommended to use a Sand Seal to reach it, and provided that the player has purchased the DLC, it's also recommended that the Travel Medallion is used for fast travel to it while its Shrine Quest is cleared.

The shrine provides a close travel gate to the DLC-exclusive Keive Tala Shrine as part of EX The Champions' Ballad, which is east from this shrine.

Follow the objective marker again, and talk to Anche until you're given some ice.

Carry the ice to the objective marker. Multiple methods exist for this, such as passing time until night. Also, you don't have to wear Gerudo clothing for this step. However, you can also carry it straight there wearing Gerudo clothing if you like; if you're fast enough, the ice won't melt enough to matter, even in the middle of the day. Feel free to do it your own way. The ice also stops shrinking if put under shadow.

The ice tends to stop melting in the early night, so it's ideal to talk to Anche at the Icehouse at twilight (~5:00 PM, early enough for her not to have retired for the day), so the ice stops melting altogether by 8:00 PM. The less Link follows the ruins path, the less enemies he'll encounter, and if he bears right through the sand, he'll encounter a couple of elemental Lizalfos at the most.

Once you deliver the ice, the objective marker will move again, head there and talk to Pokki again to complete the quest.

After all that effort, the shrine itself contains no challenges at all. Simply move forward, open the chest for a Diamond, and then examine the altar for your well-earned Spirit Orb.