From Zelda Dungeon Wiki
Jump to navigation Jump to search
Want an adless experience? Log in or Create an account.
Ishto Soh Shrine 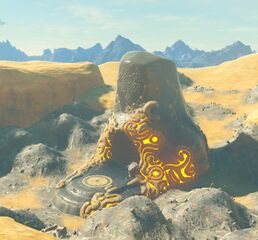 Ishto Soh Shrine is one of the many Shrine of Trials from Breath of the Wild.

The shrine is located on the southwest side of the Oseira Plains, hidden on top of a cliff. The shrine is surrounded by rotting garbage piles, presumably caused by Moza's failed experiments with food. The shrine is visible by looking east from the Daval Peak, and it's flanked by a Stalnox to the south and a White-Maned Lynel to the southeast; as the game progresses, the Lynel will eventually turn into a Silver Lynel, which should be taken into consideration if Link approaches the Plains from the Highland Stable.

The shrine provides the closest Travel Gate to the Plains, which may be used during the obtainment of the Giant Horse on the Taobab Grassland, located on the northern part of the Plains.

There are no requirements to activate the shrine.

After the player enters, they run down the slope, do a U-turn, then pick up the laser emitter. The player can reorientate the emitter to open a path to a chest, which contains the Topaz gem. Alternatively, the player can, after spawning, turn right and glide down to the chest (the laser emitter can be picked up on both sides).

The player should place the laser emitter on the moving platform so it will occasionally hit the switch. This will cause platforms to periodically rise and fall. The player can now climb the platforms on the right side to access Ishto Soh. To open the chest (Ancient Core), the player can glide down from the top of the shrine to the platforms at the front of the room, jumping off a short while after a switch hit.

Then, the player can speak with Ishto Soh to receive a Spirit Orb.