From Zelda Dungeon Wiki
Jump to navigation Jump to search
Want an adless experience? Log in or Create an account.
Moza 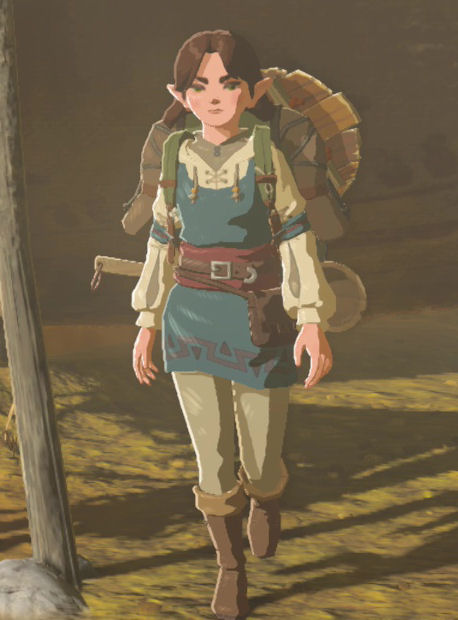 Moza is a character in Breath of the Wild.

She can be found at a small camp outside the Ishto Soh Shrine, just west of the Oseira Plains in the Lake Tower region. She can be seen wielding a Soup Ladle and a Pot Lid.

She wakes up at 5am each morning and then walks over to her Cooking Pot. She is trying to cook her ultimate dish with some strange recipes, but they always end up turning into Rock-Hard Food or Dubious Food.[1] The burning of her food makes it look like it is a smoke signal, and when Link indicates that, Moza will get defensive and state that she's not trying to make a signal, but rather, she is trying to cook.[2]

Moza is not only using the wrong ingredients, but she is also over-cooking her food, causing it to burn.[3] Moza has recipes for a lavish meat dish, an ancient meat dish, and an ultimate survival meat dish and wants to teach the recipes to Link.[4]

The Lavish meat dish consists of any type of meat, whether it be from bird meat or a steak. Then it includes any type of Ore, such as Flint. However, whenever she cooks this meal, it ends up turning into Rock-Hard Food.[5][6]

The Ancient meat dish consists of any kind of meat and is then cooked with any Ancient Material, such as an Ancient Shaft or Ancient Screw. However, when mixing ancient materials with food, this will always turn into Dubious Food.[7][8]

The Ultimate survival dish is when Moza mixes up Monster Parts. Much like the ancient meat dish, this will result in Moza creating Dubious Food.[9][10]

Moza spends the entire day cooking, waking up at 5am each morning and remaining in front of her Cooking Pot until midnight. She goes to bed each evening disappointed in what she has cooked. However, she remains hopeful than tomorrow her fortunes turn around and she is able to cook a nice recipe.[11] Even when she is sleeping, she is thinking about her recipe for the next day, thinking it might need more Salt, or perhaps it has too much Salt.[12]