From Zelda Dungeon Wiki
Jump to navigation Jump to search
Want an adless experience? Log in or Create an account.
Dagah Keek Shrine 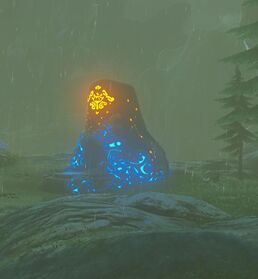 Dagah Keek Shrine is one of the many Shrine of Trials from Breath of the Wild.

The questgiver for this quest is Laruta, a female Zora child in Zora's Domain.

Once you have accepted the quest, it's strongly recommended to set it as the active quest marker. This will direct you where you need to go for each step.

First it will direct you to Trello, who will tell you he dropped the spear.

It's just below the west bridge out of Zora's Domain. The Ceremonial Trident is submerged in the water below the bridge, where Trello is looking. If using Magnesis while standing near Trello, aim in the water below to see where the spear is located. Hop off the bridge and paraglide to a nearby structure. Use Cryonis to stand below the bridge and Magnesis to raise the spear and grab it. (Make sure you do not use it to fight with until the completion of this quest, don't want to destroy it. Also don't throw it away obviously.)

Then it will direct you to the platform near the shrine. When you get there, use Zora Armor to swim up the waterfall, then glide down near the platform. Before you land, equip the Ceremonial Trident and attack with it in mid-air above the platform (Press Y without canceling the paraglider). You will thrust down onto it which will complete the quest and unlock the shrine.

Note: If you've wasted your Ceremonial Trident, then the Lightscale Trident you got from the Divine Beast Vah Ruta Main Quest will also work in a pinch. If you don't have access to either weapon, you can speak with Dento in the Hammerhead workshop who will allow you to craft either one in exchange for some materials.

After all that effort, the shrine itself contains no challenges at all. Simply move forward, open the chest for a Silver Rupee, and then examine the altar for your well-earned Spirit Orb.