From Zelda Dungeon Wiki
Jump to navigation Jump to search
Want an adless experience? Log in or Create an account.
Yowaka Ita Shrine 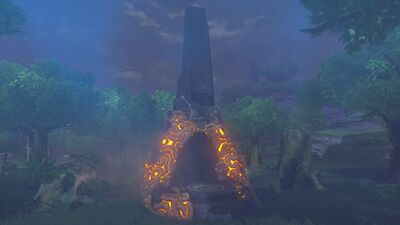 The Yowaka Ita Shrine, also known as Collected Soul, is one of the many Shrine of Trials from Breath of the Wild.

This shrine is located in the Forest of Spirits on the Great Plateau, and is accessed during the Divine Beast Tamer's Trial, as a part of The Champions' Ballad DLC pack as part of the One-Hit Obliterator Trial.

This Shrine is only accessible after returning to the Shrine of Resurrection and obtaining the One-Hit Obliterator. This is the only weapon Link has during the quest, and so while working through this Shrine.

The aim here is to defeat all the enemies in the surrounding area. Use the One-Hit Obliterator on the more difficult enemies, such as the Silver Bokoblin on top of the large stump. If possible, stay on top of the stump and snipe the Bokoblins on the ground, as they mostly surround it.

Watch out for defensive spikes on the ground level, as the low visibility conditions of the Obliterator trial added to the obscurity of the foliage will make them difficult to spot.

If you have no long range bows, the Phrenic Bow on top of the tree stump with the Silver Bokoblin and the one inside the shrine will be enough to see you through the other 3 areas.

As you approach the slope, use Magnesis on the spiky balls and move them to a flat surface to avoid taking damage as they drop. Do not throw them off the edge as they will respawn.

Pick up the metal bowl using Magnesis and look over to the east, you will see many objects falling down a slope but the things to focus on are two differently-sized orbs and a chest.

Carefully aim the bowl to pick up the objects one at a time and slowly bring them towards you. The chest found here contains 5 Bomb Arrows.

Placing the large orb into its hole will open the gate to a second chest. Open it for a Phrenic Bow.

Carry the small orb up the slope, which should be clear of spiky hazards. Place it in its hole to raise the gate to the Sheikah Monk Yowaka Ita. Speak with them to obtain a Spirit Orb.