From Zelda Dungeon Wiki
Jump to navigation Jump to search
Want an adless experience? Log in or Create an account.
Maka Rah Shrine 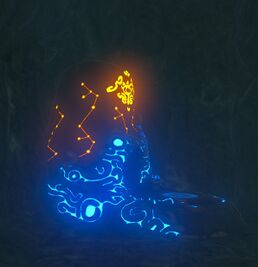 At the center of Lake Kilsie, to the east of the Shrine itself, there is an tall island that sticks out of the water. Use a bomb to break the boulders on the top of this island, creating a wind geyser. Then use the paraglider to fly up and glide directly south to the other side of the water, away from the raft. You will see another pile of rocks at the bottom, under the overhang, that you can blow up. Do so and ride the updraft, then look northeast. There is a small island-like thing with yet another set of rocks. Ride on over and blow 'em up! Now look northwest. You can see an entrance to a cave at the top of the cliff marked by torches. Follow the cave down below and swim across some shallow water through a small passage on the right-side to arrive at the Shrine.

In the next area, patiently wait for the path to present itself and then quickly run across the platform while avoiding the spikes.

Defeat the four Guardian Scout I that appear. Big tip, this is the perfect spot to practice your timing with the shield deflect. Run towards the chest on the right corner of the room and activate Cryonis right underneath you (down on left buttons). The treasure chest contains ten Bomb Arrows. And then do the same thing on the left of the room for the switch to open the large door.