From Zelda Dungeon Wiki
Jump to navigation Jump to search
Want an adless experience? Log in or Create an account.
Hebra Tundra 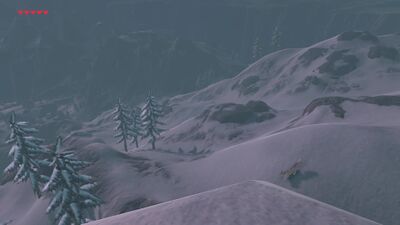 Hebra Tundra is an area in Breath of the Wild.

The Hebra Tundra is a massive area located between the Hebra East Summit and the Biron Snowshelf. It takes up a good portion of the Hebra Mountains, and like the rest of the province, it has bitterly cold temperatures. Link will need to wear armor that has Cold Resistance, such as the Snowquill Set, in order to survive the cold climate.

There is a peak at the south end of the Tundra with a pinwheel. Shoot the three balloons to get the Korok Seed. Just south of the peak, there is a camp with a Black Lizalfos and a ton of Black Moblin. When all the enemies are defeated, Link can open the treasure chest to get a Gold Rupee.

At the northwest end of the Tundra, on the much higher elevation, there is a chest buried in the snow that contains a Knight's Bow. At the northeast end of the Tundra, just northwest of Selmie's Spot, there are a pair of treasure chests. There are a cluster of six trees here and the treasure chest in the snow contains a Sapphire gem. Then a pile of rocks, up against the cliff has a chest with five Bomb Arrows.

If Link speaks with Selmie at Selmie's Spot, he can participate in Selmie's Shield-Surfing mini-game. The entirety of the beginner's course takes place on the Hebra Tundra, where Link will need to Shield Surf down the slope, heading westward to a bridge that is just north of the Biron Snowshelf. The advanced course takes Link across this same path, and eventually turning southward, heading towards the Sturnida Basin. 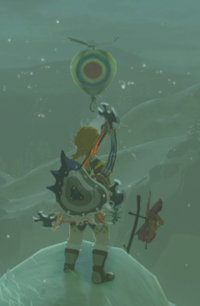 Stand next to the pinwheel and shoot the three balloons. Cold Resistance Level 2 recommended 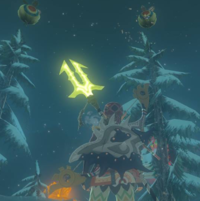 Climb to the top of the hill to find a pinwheel. The three balloons constantly disappear and reappear over the nearby trees.