From Zelda Dungeon Wiki
Jump to navigation Jump to search
Want an adless experience? Log in or Create an account.
Hebra South Summit 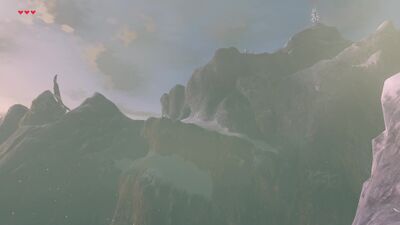 The Hebra South Summit is a location found in Breath of the Wild.

The Hebra South Summit is the mountain range found at the south end the Hebra Mountains. The Summit includes the Talonto Peak and Corvash Peak. Like much of the province, it is bitterly cold and Link willl need to wear some armor with Cold Resistance, such as the Snowquill Set.

The area is filled with ice based enemies, including Blizzrobes, Ice ChuChus, Ice Keese, Frost Pebblits, and Ice-Breath Lizalfos. These enemies are all vulnerable to flame based weapons or Fire Arrows, which will defeat them instantly.

There is also a variety of cold-weathered wildlife, including some Tabantha Moose, White Pigeons, Cold-Footed Wolves, and some Great-Horned Rhinoceros.

Just east of the Corvash Peak, there is a large wind tunnel that Link can use along with his Paraglider to quickly get up to a higher ledge on the summit. A second wind tunnel can be found just to the east near the steep decline that leads down to the Hebra Plunge. On one of the western ledges by the wind tunnel, there is an ice block that has a treasure chest inside it with Silver Rupee.

Just northeast of the Talonto Peak, there is a treasure chest buried in the snow next to a few trees and it contains a Royal Broadsword. At the west side of the summit, where there is a large flag and a Blizzrobe, just before a steep decline, there is a wooden treasure chest that has five Fire Arrows.

At a much lower elevation, at the northwest side of the summit, there is a fairly large enemy camp, which includes some Blue Bokoblin as well as some dangerous Black Moblin who wield some Ice Arrows. At the top of the camp, there is a wooden treasure chest that has five Bomb Arrows.