From Zelda Dungeon Wiki
Jump to navigation Jump to search
Want an adless experience? Log in or Create an account.
Hebra East Summit 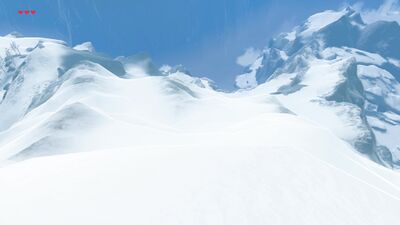 Hebra East Summit is a location in Breath of the Wild.

The Hebra East Summit is a massive mountain range found at the east side of the Hebra Mountains. The entire mountain range is bitterly cold, requiring Link to be wearing an armor set with Cold Resistance, such as the Snowquill Set, in order to survive the harsh conditions. The summit includes the Hebra Peak, which is the highest and one of the coldest points in all of Hyrule. During the overnight hours, when it is snowing, temperatures could drop all the way to -75 degrees Fahrenheit at some parts near the peak.

The cold climate will attract a variety of cold creatures and enemies. There are several Snowcoat Fox and Cold-Footed Wolves that can be found running around on the mountain range. At the lower elevations, there are a few Great-Horned Rhinoceros and Tabantha Moose as well. Additionally, enemy Snow Octoroks, Ice Keese, Frost Pebblits, and Ice-Breath Lizalfos can be found throughout the region. All of these ice-based enemies can be defeated with a single shot from a fire based sword or a Meteor Rod.

At the southeast part of the summit, there is a massive wind tunnel, which blows air up, allowing Link to use his Paraglider and quick ascend to a higher peak on the mountain. Just to the northwest of where the wind tunnel stops blowing, there is a treasure chest buried in the snow and it contains five Ice Arrows.

Just northwest of the Hebra Peak, a bit down the mountain, there are a series of frozen ice blocks. Link can use a Fire Arrow, a fire weapon, or create a campfire to melt the ice. The large ice block in the area has a Black Lizalfos frozen, with one of the small ice blocks nearby having a treasure chest, which contains five Shock Arrows.

There are a few Koroks to be found on and around the Hebra East Summit. One is underneath a rock at the very top of Hebra Peak. Another is just southwest of the peak and the Goma Asaagh Shrine, where there is a Korok beneath a rock, hidden underneath some large boulders. At the far east end of the summit, there are a pair of trees with a circle of rocks. Placing the missing rocks in the proper spots to get the Korok Seed. One more Korok Seed can be find by examining the fair lights atop the dead tree, located at the northeast part of the summit.

Just southwest of the Hebra Peak, right down the steep slope, there are several massive ice blocks. Link can melt these with fire based weapons or a small campfire. Inside the ice blocks, Link will find an enemy Black Moblin, a Dragonbone Moblin Club, and a treasure chest that contains a Blizzard Rod. Behind the blocks of ice, Link will find the Goma Asaagh Shrine. Link will need to melt the pedestal so he can place his Sheikah Slate inside, to open the shrine.

The Goma Asaagh Shrine is A Major Test of Strength shrine. Defeat the Guardian Scout IV and then open the treasure chest to get a Royal Claymore. Then run up to the alter and speak with Goma Asaagh to get a Spirit Orb.

As part of the Xenoblade Chronicles 2 side quest, Link can travel up to the Hebra Peak. From the peak of the mountain, if Link looks to the southeast at nighttime, he will see and hear a shooting star. It will crash into the mountain, just southeast of the peak. If Link travels to the area, he'll find a glowing red treasure chest. Inside there is the Salvager Trousers, a piece of armor that is part of the Salvager Set. 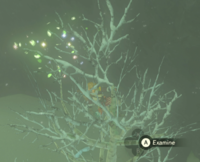 Climb to the top of the tree and examine the swirling leaves.