"The Rito's home village hangs from the sides of a giant stone pillar that stretches up from the center of Lake Totori. Airy abodes and shops constructed from lumber are affixed to the side of the column and connected by a spiraling staircase. The upward construction of their village is unique to the flight-capable Rito, and there are many other aspects of Rito Village that are inconvenient to the other races of Hyrule, so they get few visitors." 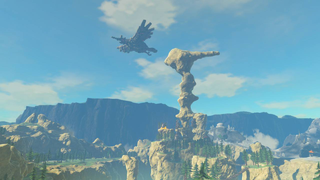 Rito Village is a location found in Breath of the Wild. The village is built vertically on a wooden frame and walkway deck walkway spiraling around a large pillar in the center of Lake Totori. It is a home of the Rito tribe, but also a vacation spot for Hylians throughout the world.

The village is under siege by Divine Beast Vah Medoh up in the sky. The Rito are not able to freely fly as they once were able to, instead needing to fly at lower elevations so that they are not attacked by Medoh. The Divine Beast has caused all the villagers to live life a bit more uneasy. The various business is not thriving well, the children of Rito are not partaking in their singing exercises, and many of the residents are injured or are off missing. This leads Teba and Harth to head out to deal with it only for the latter to be hurt while Teba escapes to the Flight Range to prepare to attack again. After Link arrives and receives information from the villagers with them being the elder Kaneli and Teba's wife Saki, he joins forces with Teba, despite his initial reluctance until he tests him, to destroy Vah Medoh's cannons to disable the barrier that deters intruders. Teba couldn't join Link on his mission to restore Vah Medoh due to suffering a burn on his leg from the lasers and leaves for the Flight Range. After Link defeats Windblight Ganon, the source of Vah Medoh's abnormal behavior, Revali relocates Vah Medoh to the rock spire to set sights on Hyrule Castle where Calamity Ganon resided. These events have allowed the Rito to resume their normal lives and fly freely without fear of ever being attacked again.

The Swallow's Roost is an Inn located at the lower level of Rito Village. The inn is run by Cecili and it offers a standard bed for 20 rupees, as well as a Rito-down bed for 80 rupees, which will give Link three yellow Temporary Hearts, as well as a full Temporary Stamina wheel.

The Slippery Falcon is a general store run by Misa that sells some general groceries as well as weapons. Cane Sugar and Goat Butter can both be found in the shop, which cannot be found in the wild. The shop also has some Bomb Arrows, which are very useful in the battle with Medoh.

The Brazen Beak is an armor shop run by Nekk that sells the full Snowquill Set. The three items in the set cost a total of 2150 rupees, but when worn, will give Link Cold Resistance, allowing him to travel to the colder Hebra Mountains just to the north.

Shoot the balloon in the heart shaped opening in the rock under vah medoh.

Up in the main tall rock pillar is a heart-shaped opening. Shoot the balloon in it.

Breath of the Wild Key Locations[edit][hide][show]
Retrieved from "https://www.zeldadungeon.net/wiki/index.php?title=Rito_Village&oldid=439338"
Category: