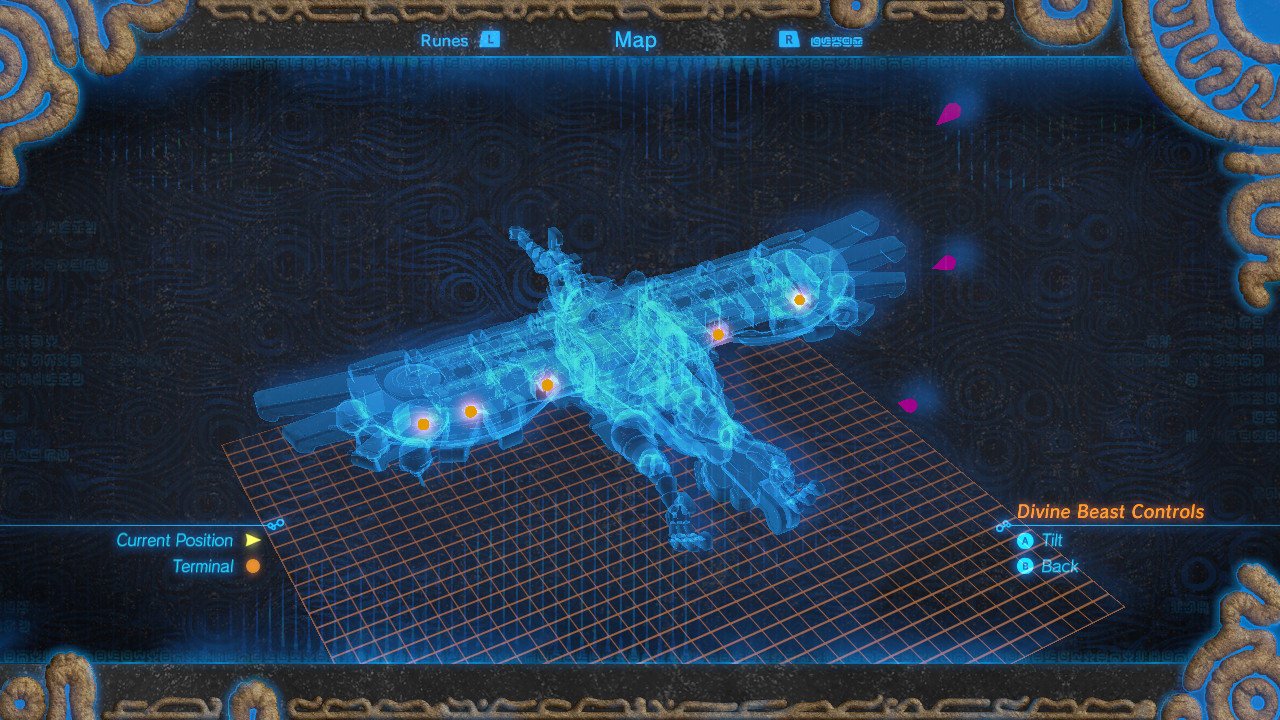 Isometric view of the Dungeon Map

Vah Medoh is one of the four Divine Beasts in Breath of the Wild. Vah Medoh serves as one of the four main dungeons in the game. Link must defeat Windblight Ganon in order to free the Divine Beast from the control of Calamity Ganon. As is with the other Divine Beasts, Link must venture inside and activate the five Sheikah Terminals in order to fight Windblight Ganon, freeing Medoh and the spirit of the Rito champion Revali. Once the dungeon is completed, Link will not be able to re-enter it, for it moves to a different location to prepare an attack on Hyrule Castle.

As Link comes in close proximity to Rito Village, a cut-scene plays showing Vah Medoh gliding around the area, making it dangerous for Rito to fly. Link must gain the trust of Teba by training at the Flight Range. After doing so, Teba will carry Link close by to Vah Medoh, allowing Link to shoot the four cannons, giving entrance to the dungeon.

On entering the dungeon, run ahead and note the Malice Eyeball on the wall to the right. Shoot an arrow out to remove the malice. You want to make it across to the other side of the room. Use magnesis on the blocks in the middle of the room to help make a path across; or use the wind geyser and paraglider over to the other side.

Defeat the Guardian Scout II, then activate the terminal in the room ahead to obtain the map.

Once Link has obtained a map of Vah Medoh, he has the ability to manipulate it in order to progress and solve various puzzles. In this dungeon, Link can either tilt the abdomen up or down around 30° either way. 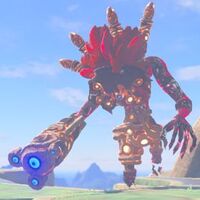 Windblight Ganon initially fires laser beams or summons a tornado, which must be dodged. After shooting the laser beams, or if stunned with arrows, it is vulnerable to attacks at ground level from a melee weapon.

In the second phase, he summons drones and bounces the lasers off these, as well as summoning a pair of tornadoes at a time. Again, these should be dodged. While the drones can be destroyed with arrows, they respawn after a time. Link can shoot Windblight in the eye with arrows, using the updrafts to enter "bullet time" to make it easier. Whenever it is on the ground, Link can also use melee attacks once more.

Finally, once at 10% health, Windblight Ganon might resort to using a fully-charged Guardian laser. If it does do this, Link can dodge it by jumping to the side, running away, or he can attempt a Perfect Guard to deflect the beam, which will create an opening for attack.

Upon freeing Vah Medoh of Calamity Ganon's influence, it will fly up to the top of a natural pillar in the center of Rito Village, and it spreads its wings in order to prepare an attack on Hyrule Castle. Having completed this dungeon means in the fight against Calamity Ganon, he will lose one-eighth of his health.

After activating the main control unit, Link cannot reenter Vah Nedoh. However, as part of the EX Champion Revali's Song DLC quest, he can present three Medoh's Emblems and be drawn into an "Illusory Realm" of memories, where he can re-experience the fight with Windblight Ganon with limited equipment.