"This is the hideout for the Yiga Clan - a group of assassins who splintered off from the Sheikah after being oppressed by the royal family of Hyrule and now worship Calamity Ganon. The entrance is hidden within a room built into a cave deep within Karusa Valley. The space has a Japanese aesthetic, and red lanterns hang down from the ceiling." 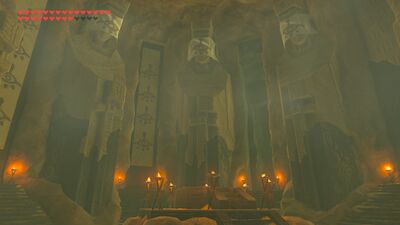 Entranceway in Breath of the Wild

The Yiga Clan Hideout is a mini-dungeon in Breath of the Wild. The base of the Yiga Clan and their leader Master Kohga, it can be found in the depths of the Karusa Valley, in the Gerudo Province.

The Hideout cannot be accessed before beginning the quest to enter Divine Beast Vah Naboris. The front entrance will be sealed shut with a stone door, while the back entrance cannot be opened from the outside.

As shown in the main picture, the entrance of the Hideout features smaller replicas of The Seven Heroines, all covered with banners featuring the inverted Yiga eye.

The main premise of the dungeon revolves around stealth, as Link is on a mission to recover the stolen Thunder Helm as part of the aforementioned quest.

As a part of the EX Champion Urbosa's Song quest from The Champions' Ballad DLC pack, the quest to uncover the Kihiro Moh Shrine entails recovering an Ancient Orb from the Hideout by infiltrating it again, said Orb being located at the small balcony where multiple Mighty Bananas bundles were previously located.

In both these infiltrations, Yiga Blademasters can one-hit kill Link if he's seen, also summoning Yiga Footsoldiers to attack him. Just as much as these Blademasters can single-strike Link, they can be single-hit killed with basically any weapon when performing successful sneakstrikes. 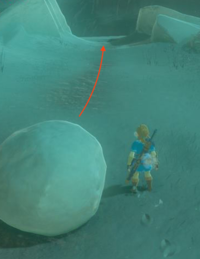 Pick up or roll the snowball and place it in the hole.

If you find this snowball hard to roll, it's because you can just pick it up instead. Put it in the hole. 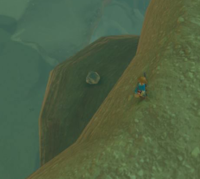 Pick up this rock, almost at the top of the cliff.

Pick up this rock, almost at the top of the cliff.