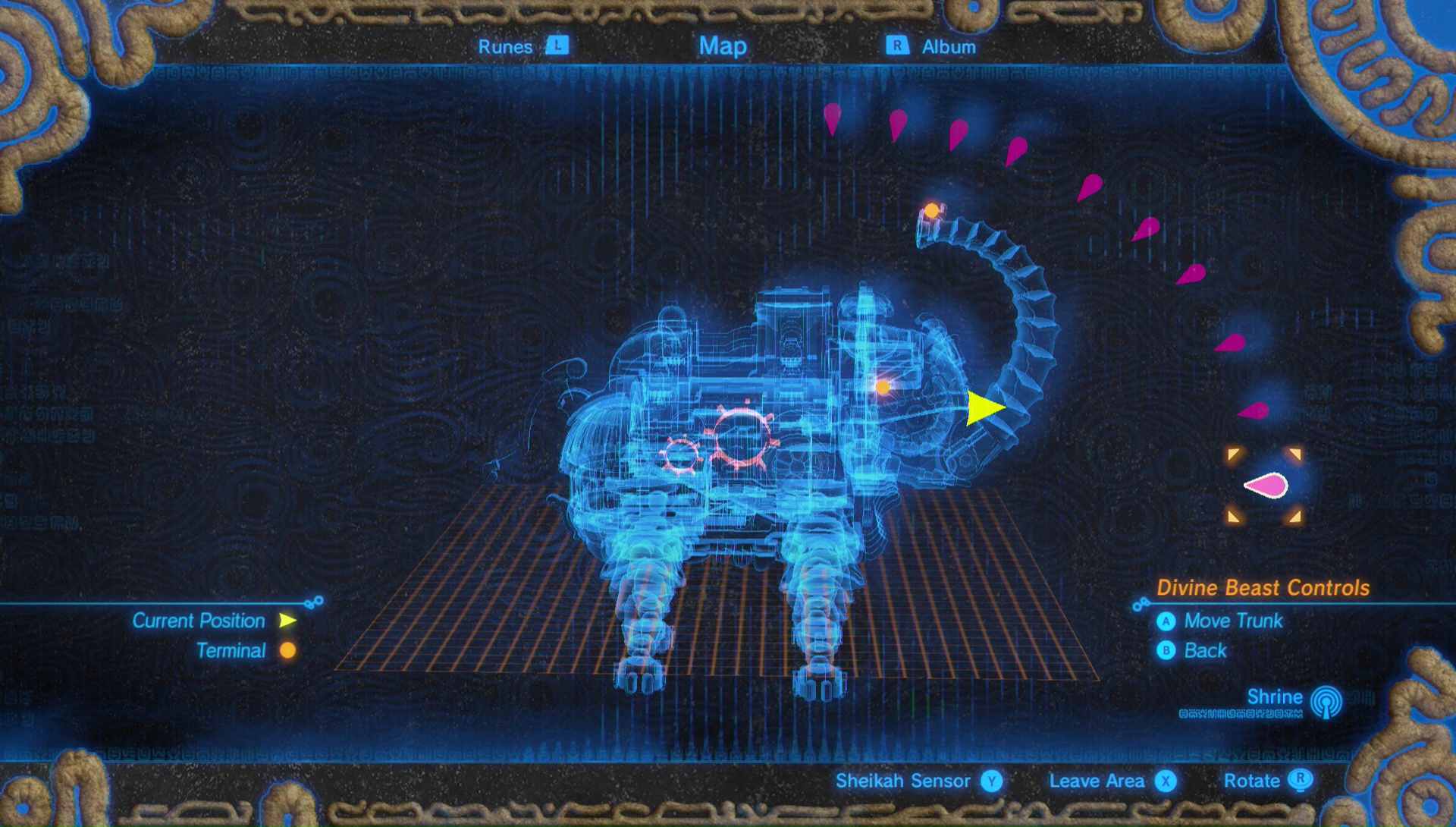 After Link has completed Reach Zora's Domain and obtained at least twenty Shock Arrows, he meets Prince Sidon at East Reservoir Lake. From there, Sidon will swim around the lake with Link on his back, while the Malice-controlled Vah Ruta will defend itself with giant ice cubes and spiked ice balls shot from cannons. Use Cryonis to destroy these.

Eventually, Sidon will swim in close, allowing Link to use the Zora Armor to swim up a torrent of water and hit a glowing orb with a Shock Arrow. Once all four orbs have been hit, the Divine Beast is subdued, and Sidon brings Link to the entrance.

When entering the Divine Beast, there is a shut gate on the left in the first room. Shoot the eyeball to destroy the Malice, then open the gate with Cryonis to get the dungeon map from the Guidance Stone, allowing Link to change the angle of water coming from Vah Ruta's trunk.

With all the terminals activated, Link can return to the lowest level and enter the door opposite the map room. This is where the main control unit lies, and Waterblight Ganon. 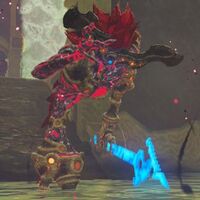 Phase I: Waterblight Ganon uses a spear to attack that has pretty good range which he will swing, thrust, throw or use a shockwave. He also warps around the area. Focus on attacking his eye with arrows to stun him. Bomb arrows will work better than regular arrows as it will inflict more damage. When you hit his eye enough he will be stunned and fall. You can also just shoot him anywhere with an ancient arrow inflicting the most damage and he will fall right away. Run up to him and attack with melee weapons, arrows, elemental arrows or ancient arrows. Perfect dodge or backflip his spear attacks for melee flurry attack as well.

Phase II: As Waterblight Ganon gets towards half health he will take a new approach. He will fill the room with water leaving 4 solid platforms to stand on. He will be hanging from the ceiling now and begin using ice block attacks which can be taken out with Cryonis. It will be difficult to attack him if you are not on solid ground. You can use Cryonis to stand in the water area. When his health gets down enough he will use a laser from his eye. If you get hit by this it will cause significant damage. Continue your attack method as previous. Waterblight Ganon will use any of his attacks with no specific pattern at this point.

Once you defeat Waterblight Ganon, you will receive a Heart Container. Activate the Main Control Unit to free Mipha's spirit and receive Mipha's Grace.

After activating the main control unit, Link cannot reenter Vah Ruta. However, as part of the EX Champion Mipha's Song DLC quest, he can present three Ruta's Emblems and be drawn into an "Illusory Realm" of memories, where he can re-experience the fight with Waterblight Ganon with limited equipment.