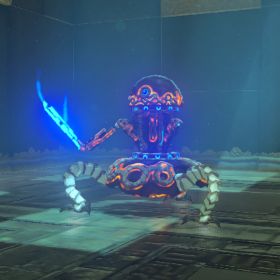 The Guardian Scout II is an enemy that appears in Breath of the Wild.

"Although originally designed by an ancient civilisation to combat Ganon, these scaled-down Guardians were placed inside shrines as part of the trials. In addition to the beam functionality, this particular model was designed to handle weaponry as a means of further testing the combat prowess of one undertaking the trials. It takes some serious skill to go toe-to-toe with one of these."

They have 375 HP and wield a Guardian Spear, Guardian Sword, or an Ancient Battle Axe. The configuration of its weapons and whether or not they also wield a Guardian Shield depends on the instance of this enemy you encounter, though they only ever hold one weapon at a time.

The Guardian Scout II may start attacking with either its weapons or its laser ability. It will likely switch strategy mid-battle to catch you off guard; this can happen when its health drops to a certain amount. When it uses its laser ability, you can parry the pulse with Link's shield using a Perfect Guard to reflect the projectile back at the Scout.