From Zelda Dungeon Wiki
Jump to navigation Jump to search
Want an adless experience? Log in or Create an account.
Fire Chuchu 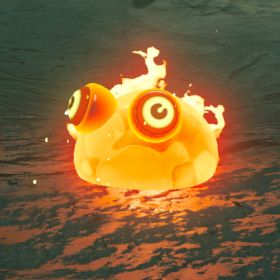 Fire Chuchus are enemies found in Breath of the Wild and Age of Calamity. They are fire variants of the standard Chuchu.

Fire Chuchu are weaker enemies that can be taken out with a single hit. When they are attacked, they will bloat up and explode, sending out a flame attack, burning any warrior that is nearby. They will occasionally drop Red Chuchu Jelly as a reward when defeated. After each Fire ChuChu is defeated, the player will receive a Chuchu Trophy, which can be used to complete quests or upgrade weapons of the various warriors.