From Zelda Dungeon Wiki
Jump to navigation Jump to search
Want an adless experience? Log in or Create an account.
Blue Hinox 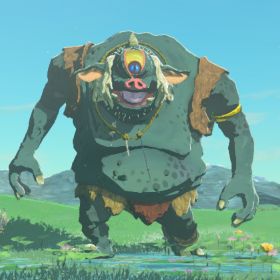 Blue Hinox from Breath of the Wild

Blue Hinox are variants of the standard Hinox, appearing in Link's Awakening, Breath of the Wild, and Age of Calamity.

The Blue Hinox appears as a basic enemy in Turtle Rock. While the original Hinox serves as a mini-boss in Bottle Grotto, the Blue Hinox is just a standard enemy that will repawn every so often. Despite its different color appearance, it is identical to the standard orange hinox, as well as the Red Hinox. The Blue Hinox will toss bombs towards Link and will occasionally charge at him, trying to pick him up and launch him across the room.

In Breath of the Wild, the Blue Hinox is a more powerful variant of the standard Hinox. It has more health and will deal more damage to Link. Fighting a Blue Hinox is identical as fighting a standard Hinox, with their large eye being a weak point. Link can shoot the Hinox with an arrow to stun him, allowing Link to then attack its main body with sword attacks. The Blue Hinox often has wooden or steel shin guards, making it so that Link can attack his feet directly, while he is standing.

When defeated, a Blue Hinox may drop a Hinox Toenail, a Hinox Tooth, or Hinox Guts. The Blue Hinox is the most common of the three Hinoxes variants. It appears as a boss on Eventide Island, as well as one of the Giant Brothers in the shrine quest, The Three Giant Brothers.

When defeated, a Blue Hinox may drop a Hinox Toenail, Hinox Tooth, or Hinox Guts. Additionally, the player will receive a Hinox Trophy each time one of these bosses are defeated. These can be used to complete quests or upgrade weapons of the various warriors.