From Zelda Dungeon Wiki
Jump to navigation Jump to search
Want an adless experience? Log in or Create an account.
The Three Giant Brothers 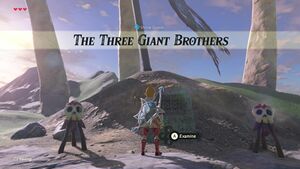 The Three Giant Brothers is a Shrine Quest from Breath of the Wild.

Northwest of Lurelin Village there are three areas with shallow water that are surrounding Mount Taran. This includes the Rabella Wetlands, Hanu Pond, and Uten Marsh. Right in the center of these three areas is a stone tablet with a trio of pedestals. Read the stone tablet to begin the Shrine Quest.[1]

The goal is to collect the three Ancient Orbs from the giants at the three respective regions and then place them in their respective pedestals.