From Zelda Dungeon Wiki
Jump to navigation Jump to search
Want an adless experience? Log in or Create an account.
Hinox (Oldest Kin) 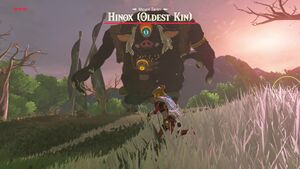 Hinox (Oldest Kin) is a particular Hinox found in Breath of the Wild.

The Hinox (Oldest Kin) is a Black Hinox and he can be found sleeping at the Rabella Wetlands within Mount Taran. He is the oldest of the three Hinox brothers in the region that are part of the The Three Giant Brothers shrine quest. The Hinox has a large Ancient Orb around its neck. Link can sneak up on top of the Hinox and steal the orb before it even wakes up. Alternatively, Link will need to defeat the Hinox so that it drops the orb to the ground. Unlike his two brothers, the oldest Hinox is surrounded by a bunch of Blue Bokoblin as well, making it a much more difficult battle.

The oldest Hinox has a Knight's Halberd and a Knight's Bow also surrounding its neck. Once it is has been defeated, it may drop a Hinox Toenail, Hinox Tooth, or some Hinox Guts. It usually drops some cooked meals as well, including a Seared Steak, Roasted Bird Drumstick, Roasted Bird Thigh, or Seared Prime Steak.