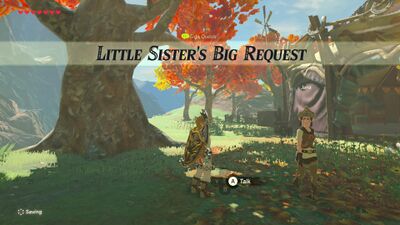 Speak to Jana at the South Akkala Stable during the daytime. Before being able to start the quest, Jana will be looking for an Armoranth. After giving her one, she will ask what brings Link all the way to the South Akkala Stable. After answering her, she will tell Link that her younger sister Gleema loves insects, and there is a particular insect that she really wants to see. However, Gleema refuses to tell Jana what that insect it. Jana will task Link within finding out what her younger sister wants, as she wants to get it for her, as Gleema's birthday is coming up.

After talking to Jana, you then need to find Gleema. She is a child, wandering around the path just south of the stable. After talking to her, she will reveal her secret that Jana is creeped out by dragonflies. In particular, Warm Darners, Cold Darners, and Electric Darners.

Return to Jana and speak to her to give her the news. She is agitated that her sisters wants dragonflies and understand now why her sister didn't tell her. However, it is her sisters birthday and she doesn't have a choice. She will then task Link in bringing her one of each type of darner.

The next objective is to collect one Warm Darner, Cold Darner, and Electric Darner each. They can be found in the wild, with the electric variety only appearing during thunderstorms. However, an easier way is to purchase them from Beedle.

Once Link has collected all three darners, he can return to speak with Jana. While she is thankful that Link found the darners, she just cannot bring herself to take them. She will then task Link in giving them directly to Gleema.

Run back over to Gleema and show her the dragonflies that you caught for her. She will be overwhelmed with excitement, so much so, that she will run over to her older sister Jana to show them to her.

Finally, speak with Jana once again. She has calmed down a bit and will thank you for catching the dragonflies. She will reward Link with a Silver Rupee, completing the quest.