From Zelda Dungeon Wiki
(Redirected from Sign of the Shadow)
Jump to navigation Jump to search
Want an adless experience? Log in or Create an account.
Sasa Kai Shrine 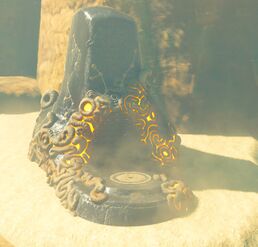 Sasa Kai Shrine is one of the many Shrine of Trials from Breath of the Wild. This Shrine is linked with the Sign of the Shadow Shrine Quest given by Kass at Gerudo Tower. To solve the riddle and reveal the shrine, Link must be at the metal plate of the shrine location at specific times in-game. As the sun rises overhead, he should step onto the metal plate and fire an arrow straight at the sun above him. Doing so successfully will trigger a cutscene, and the Sasa Kai Shrine will rise up from the ground next to Link.

The shrine type is A Modest Test of Strength.

Talk to Kass, at the top of Gerudo Tower, to start the quest.

Stand on the pedestal to the southeast, and wait for it to light up (it will make a sound when it does). This will occur when the shadow of Gerudo Tower comes close to crossing the pedestal, and can occur at night (between 12:50-1:10 AM) or during the day (between 2:55-4:00 PM) when the sun or moon passes behind Gerudo Tower. When this happens, shoot an arrow aiming over the top of Gerudo Tower to complete the quest and unlock the shrine.

Note: Your arrow shouldn't be aimed so high that it goes over the tower. Just aim above the tower and shoot; the arrow will fall and hit the tower but that's okay.

Defeat the Guardian Scout III to unlock the exit. Open the chest, which contains a Frostblade, and head to the altar for your Spirit Orb.