From Zelda Dungeon Wiki
Jump to navigation Jump to search
Want an adless experience? Log in or Create an account.
Takama Shiri Shrine 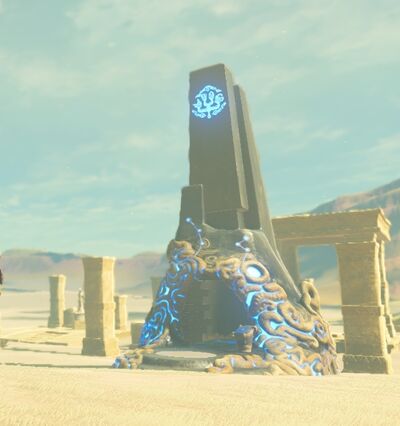 The Takama Shiri Shrine, also known as Dual Purpose, is one of the many Shrine of Trials from Breath of the Wild.

This shrine is located northwest of Gerudo Town, and is accessed during the Divine Beast Tamer's Trial, as a part of The Champions' Ballad DLC pack.

This objective requires you to get a Sand Seal. I recommend heading to Gerudo Town and speak with Frelly to rent out a sand seal. Once you are outside on the desert, head to the northwest of Gerudo Town. You will find a blue circle and once you move through it, another circle appears further ahead. Continue going through a series of circles until you make it to the end and the Takama Shiri Shrine appears.

The shrine is titled the Dual Purpose, as there a series of metallic platforms that you will need to pass through areas, as well as continue the electric current. In the first room use Magnesis to move both platforms to the left and make your way towards the locked gate. Then turn around and pull the two blocks to the other side, causing electric current to flow through and open the door.

In the second room, disconnect the first metallic block so that it is no longer charged. You can do this by moving the second block, or by moving the block closest to the electricity. Jump onto the first block and make your way along the perimeter to the right. From here create a safe path using the blocks to reach the platform that has the electricity.

Push a block so that it is right up against the locked gate, and a second block right next to it, so you can easily walk over to it. Now use remaining two blocks to transfer electricity across to the other side, causing the gate to open. Make sure neither of the blocks are touching the blocks closest to the gate, otherwise you won't be able to walk on them.

In this final room there is a treasure chest that you can get. Behind the blocks, if you look on the ground you'll find an electric pathway. Move the blocks so that electricity flows to the ground, opening the gate. You can open the treasure chest to get a Royal Bow.

Note that if you equip the Thunder Helm, you can run across the electrified blocks without harm.