From Zelda Dungeon Wiki
Jump to navigation Jump to search
Want an adless experience? Log in or Create an account.
Ze Kasho Shrine 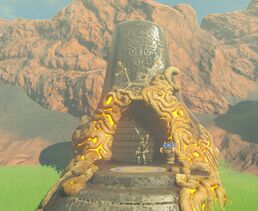 The Akkala Citadel completely obscures both the South Akkala Stable and the Ze Kasho Shrine when seen from the northern cliffs of Lanayru. The stable and the shrine are behind the citadel.

Given the chance that the player enters Akkala from the mountains of Lanayru bearing north from the waterfalls (since climbing said mountains is done through the waterfalls in Lanayru using the Zora Armor), there's a significant possibility that both this shrine and the stable will be overlooked because they'll be completely hidden from sight by the Akkala Citadel Ruins, as they're on the opposite side of said citadel.