From Zelda Dungeon Wiki
Jump to navigation Jump to search
Want an adless experience? Log in or Create an account.
Malin Bay 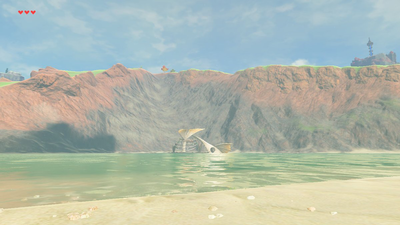 Malin Bay is a location found in Breath of the Wild.

Malin Bay is a body of water along the East Akkala Beach, which partially surrounds the Rist Peninsula. The Bay has numerous enemy Water Octoroks, as well as an assortment of Bokoblins, Moblins, and Lizalfos, that surround the path on the Rist Peninsula. Within the water, there are a number of Armored Porgy and Mighty Porgy swimming around.

There are two Rafts in the area, one near the enemy base at the sound end of the Bay, and another further up the East Akkala Beach. The Rafts can be make it easier to reach the center of the Peninsula.

Main article: Into the Vortex

Just southeast of Malin Bay on the higher elevation, Link will find an Ancient Orb next to a tablet. Upon examining the tablet, this will begin the Into the Vortex quest. This requires Link to bring the orb to the center of the peninsula, causing the Ritaag Zumo Shrine to be revealed. 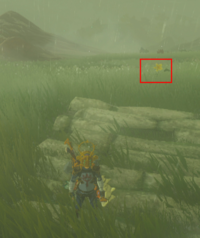 This long distance flower trail starts all the way at the top of the hill to the southwest. Specifically beginning at the end of the broken staircase in the ruins on top of the hill.

The flower trail starts near the top of the hill that leads to the ruins at the bottom of the hill.

Solve the block puzzle. The cube is located on top of the ruins to the west.

Use Magnesis to move the iron cube into the correct spot so that both formations are rotationally symmetric. The cube is located on top of the ruins to the west. 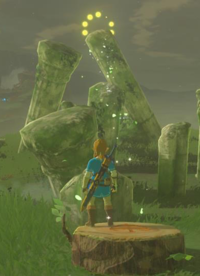 Activate the timer by standing on the seed platform, then quickly race to the top of the two angled pillars and jump off before the time runs out.

Activate the timer by standing on the seed platform, then race to the top of the two angled pillars and jump off before the time runs out. It helps to have climbing bonus, and speed bonus. I found it easiest to spam jump up the side of the pillar rather than running up the top side of it.