From Zelda Dungeon Wiki
Jump to navigation Jump to search
Want an adless experience? Log in or Create an account.
Noe Rajee Shrine 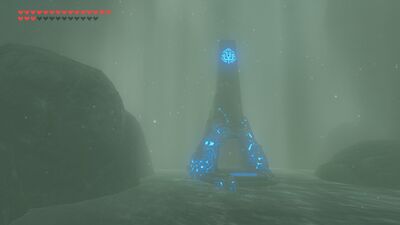 The Noe Rajee Shrine, also known as The Four Winds, is one of the many Shrine of Trials from Breath of the Wild.

This shrine is located in the bottom of the pit at the Flight Range, and is accessed during the Divine Beast Tamer's Trial, as a part of The Champions' Ballad DLC pack.

This Shrine can be found by going to the Flight Range and shooting four of the new, Sheikah-esque targets at once, since they respawn quickly. The way to do this is by floating in the updraft and pulling out your bow mid-air in an area where four targets are easily seen. Aim carefully as fast as possible and take out four targets before you run out of stamina. If you need to, take a Energizing Elixir or two to regenerate some stamina.

If you successfully shoot down the four targets at once, the Shrine will appear below.

When you first enter the Shrine you will spot an inactive switch. Loose an arrow towards it to active it, which will turn on an updraft for you to float up.

Land on the platform ahead, to scope out the moving pillar in front of you. The aim here is to activate four switches, each on a different side of the pillar. Locate them, and shoot them to activate an updraft.

One is found behind some cracked stone bricks, use a Remote Bomb or a Bomb Arrow to break them.

One is found behind a metal grate; simply fire an arrow through a gap to activate it.

One is inside the pillar, toward the base. Float into it and up the updraft here to find the switch.

One is found behind a door which only opens when its fan is turning. Stand above it and wait for the fan to catch some wind from an updraft. Quickly float down and enter the alcove to find the switch.

After all four switches are active, you can now reach the top of the moving pillar.

At the top, look away from the Sheikah Monk to find another pillar. Catch the updraft and paraglide around the back of this pillar to find more updrafts. Float to the top to find a chest containing a Shield of the Mind's Eye.

Finally, paraglide over to Noe Rajee and obtain one of three Medoh's Emblems.

Given the circumstance that the player has a long-ranged bow and sufficient Bomb Arrows, the multiple switches on the rotating tower can be easily activated with the shock wave of the explosions without leaving the security of its chamber's entrance other than to finally reach the Monk. This, of course, comes at the cost of resources and bow durability.