From Zelda Dungeon Wiki
Jump to navigation Jump to search
Want an adless experience? Log in or Create an account.
Jee Noh Shrine 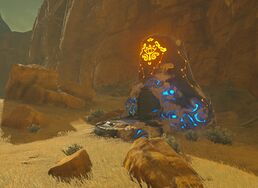 Jee Noh Shrine is one of the many Shrine of Trials from Breath of the Wild.

This shrine is located inside the Gerudo Canyon Pass at the southern most curve, east of the Wasteland Tower.

The goal in the first two rooms is to shoot an Arrow at the Ancient Orb to knock it into the ball slot on the other side (if you only have multiple-shot bows aim a little bit to the side). Using the Stasis rune on either the orb or the conveyor can help. The second room also has two Guardian Scout I on the conveyor, so be sure to defeat them first so they don't bother you.

In the third room, use Magnesis to grab the chest and open it for an Opal gem. If it falls down into the abyss, it will come along the conveyor belt again, so don't worry.

The objective is now to carry the nearby Ancient Orb to the ball slot at the end of the shrine. Alternatively, you can just use Stasis and launch the orb across the chasm towards its final receptacle.

Time your movements to cross the laser beam when it is blocked by the blocks on the other belt.

Stop on the platform to the side a moment to put down the orb and use Stasis on the next laser, since it's on your side and won't be blocked by the blocks. Run past it with the orb before Stasis wears off, and then again use timing for the third beam.

Drop the ball into its socket and the door will open. Speak with Jee Noh at the altar to get the Spirit Orb.