From Zelda Dungeon Wiki
Jump to navigation Jump to search
Want an adless experience? Log in or Create an account.
Wasteland Tower 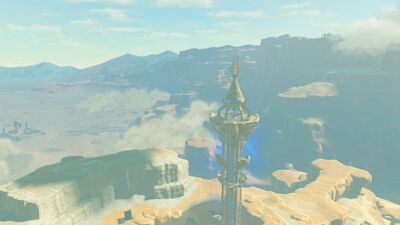 The tower itself is located on top of Spectacle Rock, and is surrounded by swamp that Link can not swim in. The area is also very windy, making it hard for Link to use his Paraglider to reach the tower. Link can use Cryonis to create Ice Blocks to carefully reach the base of the tower. There are also several large metal under the swamp and just south of the swamp that Link can stack on top of each other in order to reach the tower. The metal blocks may also be used to make "dominos" of the stone pillars simplifying the jumping to the tower. Said stone pillars can also be knocked over with Remote Bombs.

Breath of the Wild Sheikah Towers[edit][hide][show]
Retrieved from "https://www.zeldadungeon.net/wiki/index.php?title=Wasteland_Tower&oldid=433042"
Category: